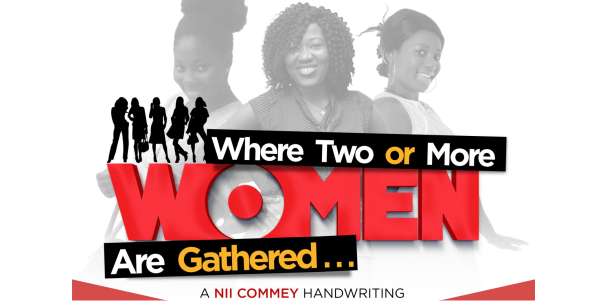 The event, which was launched at a mammoth gathering of the entire MOBA year groups in the presence of colleague past year groups from neighbouring schools, promises to be a night of sweet memories, great entertainment, soothing music and principally Nii Commey’s very latest stage masterpiece.

The president of the 1996 year group, Mr. Kwesi Enchill, who was upbeat about the night, in his remarks at the conference expressed delight about the event.

“We are very delighted about such an innovative and unconventional way of gathering all old boys and girls from neighbouring schools. We are strongly optimistic that, anyone who comes to the show will go home with fond and nostalgic memories.” He added.

He also addressed the universality of the night.

“What we want to emphasize is the fact that, even though it’s a fundraiser for MOBA, we are doing this in the spirit of building a strong bridge across all old school boys and girls countrywide, to have fun, enjoy undiluted live stage drama, good music from KODA, Addaquaye, both being amongst Ghana’s best musicians, as well as Idiot Brown, a comedian, and then raise funds to champion a good cause”

Mr. Enchill threw the invitation to all old boys and girls to come to the National Theatre on Independence Day and have fun, meet old friends, and re-spark the old flames of friendship,  and keep the flame of good fraternity aglow.

The chairman of the fund raising committee, Mr. Lawson Tornyi, also spoke about why the choice of drama of the group, and specific details about the purpose of the night.

“Completely engrossed into the drama being performed, audiences forget about themselves and immerse themselves into the characters of the drama; they laugh with the laughter on the stage and shed tears along with sad scenes. Undoubtedly, dramas are primarily made to entertain and help people de-stress, dramas are also used to create awareness among people – socially, politically or culturally, and that is the reason we opted for drama and music”.

“We are raising funds to support sanitation in the region in which we schooled, and also to support our alma mater.  It is a fine opportunity to provide Ghanaians with undiluted entertainment.” Mr. Tornyi further stressed.

The two hour fun-laden play has been described by the Playwright as timely, and a contagiously hilarious one.

“I am presenting my very latest play and I can assure you that WHERE TWO OR MORE WOMEN ARE GATHERED vividly mirrors of ourselves and the realities, the mirages and the repercussions of gross display of class, “pick- and –choose”, and judgments.

MOBA is a great association, and so I entreat every single school association to be present to give the necessary support.”

This is a fundraiser to support sanitation in Cape Coast. Each ticket you purchase will go a long way to continue positioning Central Region as hub of quality secondary education, void of sanitation problems.

On the bill on that night will also be one of Ghana’s favourite gospel musicians, KODA, Fred Addaquaye as well as Idiot Brown of the KSM Show fame.