Chris Hesse To Attend Screening Of His Majesty’s Sergeant. 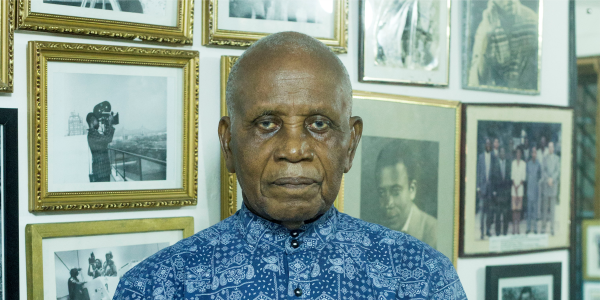 Slated for 30th November, 6pm at Akola Boni Park in Osu, the award-winning
cinematographer will be available for a Q&A after the screening.

Mr. Hesse was director of photography for His Majesty‟s Sergeant which was written and
directed by Ato Kwamina Yanney in 1984 about the role of African soldiers in the Second
World War. Shot on Panavision 35mm, the film was Mr. Yanney‟s tribute to almost 100,000
African soldiers that Britain enlisted to fight in Burma against Japan.

Blitz Bazawule, Director of Africa Film Society, said it is important for younger generation of
Ghanaian audience and filmmakers to see the works of film pioneers like Ato Yanney whose
films are essentially historical records that present us with new ways of understanding our past
and our present.

“Like Ato Yanney, Mr. Hesse has contributed immensely to filmmaking in Ghana. Young
filmmakers would be blessed to hear him speak about his work on His Majesty‟s Sergeant and
the other great films he made with film giants like Kwaw Ansah”, he added.
About Africa Film SocietyClassic in the Park is free public programming by the Africa Film Society to revive family

friendly outdoor cinema in Ghana. Now in its 4th season, Classics in the Park showcases classics
films from Ghana, Africa and the African diaspora on the last Saturday of each month.

Ghana’s Maiden Film Convention To Be Held In January 2020

Another First for Ghana Films; The Burial of Kojo is In Contention for Golden Globes Awards Consideration.