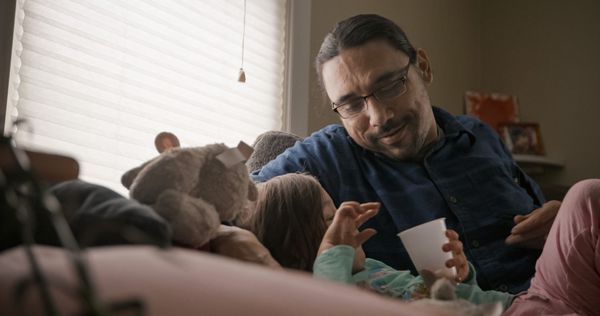 The Human Trial is a documentary film about the race for a cure for Diabetes. It focuses on a clinical trial for a potential cure involving stem cells.

Lisa Hapner who co-directs this film with Guy Mossman makes sure this film isn’t all about her. She too might be struggling with diabetes but this film isn’t about her alone. The focus is more on Maren Badger and Gregory Romero, two persons living with Type1 Diabetes.

We find out how living with the disease is affecting their lives and their families. Gregory is on the verge of losing his sight as a result of the disease and is willing to try anything to provide him with more than a fighting chance.

They both accept to partake in a clinical study for a potential cure by ViaCyte, a biotech research company. the trial involves stem cell treatment that’s supposed to help the body produce insulin.

The film does well to bring you up to speed on all the work that has been done over raw years in the search for a cure for diabetes. it doesn’t focus only on ViaCyte’s work and its success over the years.

This isn’t a fight for just one person or only company alone. All hands should be on board and this film preaches that well.

Also, the film gives you a better sense of appreciation for what it feels like to be part of a medical study. The ups and downs, the positives and the negatives. We see both Maren and Greg having to deal with both physical and mental struggles as they partake in the study. You find yourself connecting with the subjects and hoping that the study yields so positive results for them.

Maren, Greg and Lisa might not be your friend or part of your family, but their stories are very relatable. You see what they have to deal with daily and you can’t help but be moved by how strong-willed they are regardless of all that they have been through.

It makes you wonder about the several other people who have dedicated their lives to help in the many clinical trials that have been done over the years to help in the advancement of medicine and the treatment of all kinds of diseases.

Through this film, you also get a better understanding of how these studies are funded. Conducting any form of research and development especially when it comes to life-changing medicine isn’t cheap. We see the executives of ViaCyte in the film lobbying and interacting with wealthy businessmen and investors from different parts of the world trying to get them to commit some money to the fight. It isn’t as easy as it sounds. They are sometimes met with disappointment. You can’t help but wish you are in a position to provide the money they need to help the research progress.

The film in itself does great PR for ViaCyte and the work they are committed to doing in the search for a cure for diabetes. You get the sense that everyone working on this study is dedicated and committed to making sure no corners are cut.

It is intimate and educative as well. The Human Trial is one of those documentaries that finds subtle ways to leave you with a lot of information and knowledge once you see it. I would rate this documentary film 4.5/5 stars. As much as it is moving and emotional, it is engaging and an eye-opener.

If you are thinking about participating in any clinical study, this is a film that you certainly must see. It does not attempt to ward you off but does great at preparing you a lot on what to expect and how to handle it. The film also gives you hope that this fight would eventually come to an end someday and a cure for diabetes would be found.

If you are fan of medical documentaries, this is certainly a must watch.