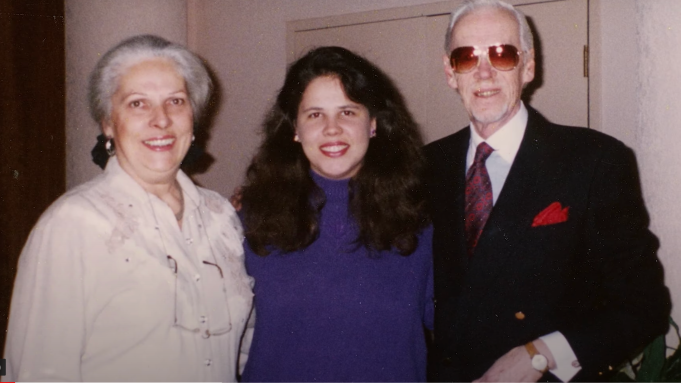 Imagine waking up one morning only to realize that all you’ve known about your past and history is a lie and you are a completely different person from what you have believed for many years.

That is the underlying story that this non-fictional documentary film tells. All of her life, Viviane has felt and lived like a Winthrop born to Reginald Winthrop and his wife of French-Canadian decent Claire. She had to live her entire childhood under the prestige and privileges that come with the name Winthrop.

At the start of the documentary film, Viviane exclaims, “I miss the life that I thought I had”. We soon figure out what she really means by that as the film progresses.

We learn from the film that in the 1580s John Winthrop was one of the leading figures in founding the Massachusetts Bay Colony.  For a name that is forever etched into the tenets of America’s history you can understand and appreciate the pride that anyone that bares it would exude.

As a directorial debut for both Viviane and co-director Adam K. Singer, this feature documentary is far from shabby.  It is clear how much research and preparation went into the making of this film.

The films narration uses both present day and archival footage to give us a sense of the lives that the Winthrops live. There are recordings, photographs and even letters that serve as genuine sources of information in Viviane’s research. Her mother, Claire also provides some information.

There are also some interviews of historians who are know much about the heritage of the Winthrops.

In the earlier parts of the film, you would almost think this is one of those films setting a personal agenda to document and spread the achievements of a family or its patriarch.

As an ‘only child’, it is clear Viviane is on an initial journey to find out more about her Winthrop lineage. She traces her heritage all the way to the founders of America. But an Ancestry DNA test she does reveals more than you could ever imagine. And then the plot thickens.  She finds out that she could possibly have a sister or several other siblings.

A possibility that her mum is not sure about. Viviane journey leads her to dive deeper into the family’s secrets that leads her to discover who she really is…. not a Winthrop.

The truths that she discovers are not exactly easy information to share or even accept. But Viviane dares to bare it all in this film. Showing how brave she really is.

Although she finds out who she really is and who her siblings are does its change her or does she continue to be the Winthrop that she has always known herself to be?

I can imagine the struggle for her or anyone that finds themselves in such a situation. But what then is family really? Is it in the blood we share or the name that we bare?

‘The Last of the Winthrops’ is enough to make anyone want to look into their family’s history and dare to ask some questions that might unearth some family secrets.

It is emotional as is it is genuine journey of its subject rediscovering herself and learning to accept who she might really be. But most importantly, it carries a subtly but important message of love and family and its power to always change and fix everything that might be broken.

I would score this documentary film 3.5 out of 5 stars.

“The Last of The Winthrops” is available on digital release including iTunes/Apple Tv, VUDU and Amazon starting from November 11.