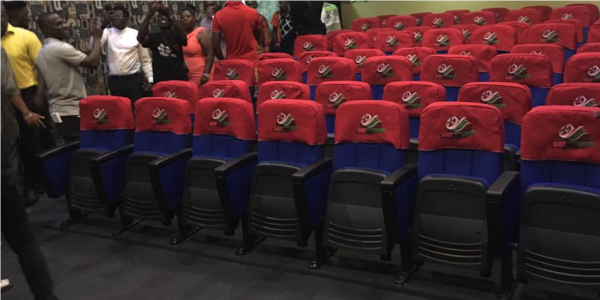 The cinema engineered by Berries Tech Ltd a Cinematic Installations, cinema equipment supplies seats 60 persons comfortably and is opened to the public and can be booked by producers and corporate institutions for screenings and premieres.

Speaking at the opening, Benny Jayden, CEO of Berries Tech Ltd described the facility as “the first of many to come to help argument the need of film screening centers across the country”.

The Launch of the cinema was preceded by the grand opening of the Holy Trinity Spa Club & Lounge the night before, Easter Friday which was also graced by some industry stalwarts who gathered to witness epic performances from the BhimNation president, Stonebwoy and his female prodigy and signee, OV.

The Holy Trinity Spa Club & Lounge is situated on the same compound as the Holy Trinity Health Spa Annex in Sogakope and is sitting on the Volta lake, as Ghana’s only club facility which is built on water.

The two facilities according to management of the Holy Trinity Spa are part of a greater vision to provide a conducive atmosphere that utilizes entertainment as important tool in managing the physical and emotional well-being of humans.

All You Need To Know About, Benny Jayden, The Young Cinema Engineering Entrepreneur