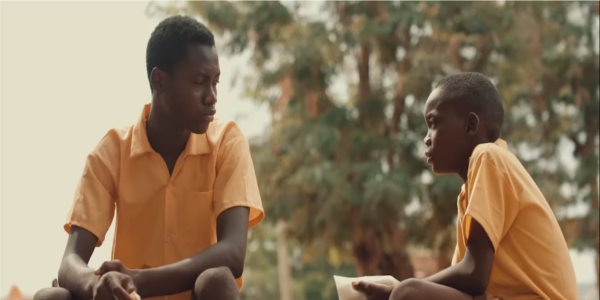 For weeks now we have all been eager, waiting for the release of ‘95’ a film written and directed by Kofi Kyei. All the posters, behind the scenes footage and trailer did good at teasing us enough and keeping us all on edge for this ‘journey into time’.

This Saber Phlims production tells the story of Popo, a young boy who struggles with accepting the loss of his brother. In order to heal, he must fight his fears and create a bond with someone he least expects to. This takes him on an emotional journey that test his wits and will.

The story is being told through a narration by an older Popo (played by Adjetey Anang) and his friend, Kwame (played by Fiffi Coleman) to their kids as they reminisced what their childhood was like.

The film feels nostalgic for anyone that grew up in that era. Reminding you of several things that made growing up in those days exciting. From the anecdotes and jokes shared amongst peers and to the everyday lifestyle of most families in that era.

The young talents used in this film gave their best and should be encouraged to do more.They clearly have the potential and the will to do more and should be groomed and provided with more opportunities like this to better their craft as actors.

The art direction does well to capture the look and feel of that era. Right down from the tattered uniforms of the school pupils to that of their teachers. All of which was well complimented by the choice of locations and props used. Also the grading and editing styles that were used to complete this film completed the look and feel that this period piece needed to have.

It’s 75 minutes’ run time didn’t feel like enough time at all and we would have preferred seeing a little more of the ‘present-day‘, especially after the very extensive flashback detailing Popo’s childhood had ended. This could had been used to better explain some of the happenings from earlier in the film and also shed more light on why those particular aspects of Popo’s childhood shown in the flashback were significant to the present and the man he turned out to become.

Also, it would have helped a great deal if the film had subtitles to accompany the dialogue, most of which was in local languages. This would have helped the viewers who do not understand those local dialects to also appreciate the subtle amounts of humor that came with some of the dialogues and anecdotes being told by the pupils.

There is also some appreciable amount of action and thrill that blends well with the other elements to support the films intense drama feel.This helped a lot to balance out the story and to give it a solid story arch which would have otherwise made it less gripping and somewhat difficult to sit through.

Although, the film’s climax left us wondering exactly what the writer was trying to leave us with, the message about how life provides us with friend(s) who can become more than brothers is spot on and still sits well long after you have finished the movie.

‘95’ feels like one of those movies that you would appreciate more after each time you see it. The nostalgia is satisfying and makes it worthwhile. We would rate this film 6.2/10 because it delivers on taking the viewer on a journey back into time whilst keeping you engrossed in the lives of two young boys and their endearing story.

The overall quality of the film was possibly tainted by the bad acoustic set up of the Accra City Hall. Although the SNAP Cinema provides a very much needed alternative for screening films, there is still a lot of things that need to be put in place to make the entire audiovisual experience worthwhile and up to standard. And this is a campaign that should be pushed by all of us creatives.

Nonetheless, this sophomore feature film from Saber Phlims is a good film that was well done and should be applauded. If you’ve seen ‘Beautiful Mind’ which also starred Adjetey Anang, then you have a fair idea of the young writer and director Kofi Kyei and his potential.

If you are in Kumasi on the 10th of August, do well to go see ‘95‘ at the Watch & Dine Cinemas inside the Kumasi City Mall as it would be premiering there with the cast and crew present.

You can also share with us your thoughts on this film in the comments section below. Also do well to add your voice to our rating for this film by choosing between 1 to 5 stars in the user rating section below.