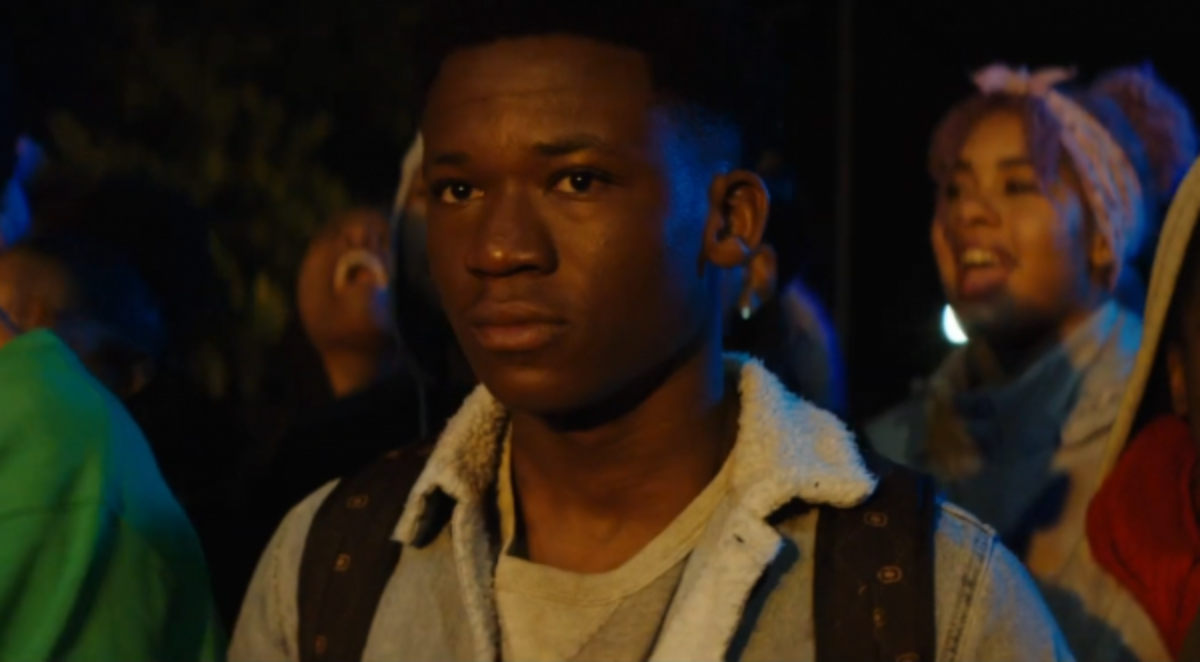 The key interest for anyone going to see this film would be Ghanaian actor Abraham Attah. After his breakthrough performance in Netflix’s Beast of No Nation (2015), he is yet to come under the spotlight in a lead role that would be enough to put him in the conversation once again.

In TAZMANIAN DEVIL he plays the role of Dayo, the son of a pastor who moves to the states on a college scholarship.  His father, Julius (Ntare Guma Mbaho Mwine) had moved to the states much earlier in his life to building his ministry’ and had become almost estranged from his only son. The relationship is further tested when Dayo’s attention is caught by one a fraternity on campus Tau Alpha Zeta that offers a lifestyle that seems to conflict with his Christian upbringing and his father’s plans of him to become a pastor.

Dayo is introduced to us as a brilliant student with a 4.0 GPA. Something which seems to be of interest to the Tau Alpha Zeta leadership. However, we never get to see that brilliance at play or why that should be of much interest to the success of the fraternity.

Throughout the film, he is portrayed as a shy, naive, and confused young man. But he does show some heart and bravado proving that he really deserves to be the leader of his group of pledges. For a greater part of his life, he’s had to live with his father’s projections of he too becoming a pastor. Even on his short visits back home to Nigeria, Julius doesn’t hesitate to remind Dayo that he too must become a pastor without taking into considerations any interests of his son. Something which is very much typical of African parents. Their relationship is strained further when Julius finally finds out about his interest in the frat.

The film uses flashbacks to give us a glimpse of Dayo’s earlier days growing up in Nigeria. We also get to see how the relationship between his parents deteriorates after his father first departs to the states. The flashbacks are captured in a gritty classic box tv 4:3 aspect ratio which is quite reminiscent of Nigerian home videos (Nollywood Movies). You can’t help but be sucked into a different time when those flashback scenes appear.

There are some sparse moments of intelligence captured in the dialogue in some key scenes. Dayo and Ike(Kwesi Boakye) share a moment where they talk about how Christianity was the worst thing to have happened to Africans. For any African or person of color, this conversation is very relatable. There is always that debate about how Christianity and religion, in general, have come to take over the thinking and lives of many Africans. This film has a unique way of sparking that conversation, and that’s appreciable. There is also that interesting clash of cultures and ideals typically between Dayo (a migrant) and Ike (an American of African descent, possibly from a family of first generation of African Americans who might have already lost touch with his African roots and heritage)

The overall acting in this film is quite sloppy and not that exciting. Abraham does embody the role of an indecisive, timid young African Christian. You can almost feel his sense of fear, confusion, and interest when he firsts encounter the frat on his first day on the college campus.

I would rate this film 5/10. It delivers a decent coming of age story but fails to sink its teeth deeper into the subject matter of faith \ religion and family.

By its end, Tazmanian Devil doesn’t provide a climax that shows a resolved relationship between father and son. Neither does it show what the effects Dayo’s choice might have on his relationship with his father or how the preacher man was going to relate to his son after it all.

The hazing is brutal and unpleasant to sit through. It is sadistic and in no way dramatic or enticing. And that seems to be all that you remember long after the film has ended. Perhaps, the intensity in the film would have been a bit lightened if there were some more college activities shown. We never get to see Dayo or any of the frat boys or pledges in an actual classroom at any point in the film. Almost as though their entire existence as college students was just limited to being frat boys.

We see some chemistry between Dayo and Nicole (Billie D. Merrit) a girl who attends his father’s church and also is in the same college as he is. But that relationship is not explored any deeper as well. What’s a college drama without a tiny dash of romance?

For anyone that is unfamiliar with the concept of college frats, Tazmanian Devil doesn’t make it easy to understand the point of fraternities and their significance in the lives of college students. Its exact message is quite confusing and hard to decipher. For a feature-length directorial debut, writer and director Solomon Onita Jr. deserves to be cut some slack. Perhaps, in some years after we have gotten familiar with his work and style, this film and its story might make more sense to us.

I can’t wait to see Abraham Attah land his next leading role. Hopefully, it would be soon and something that showcases more growth from him as an actor.