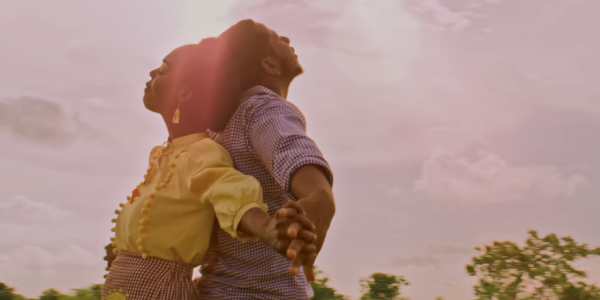 In AloeVera, separated by an argument over the chicken and the egg and which of the two came first, the Aloe’s and the Vera’s live almost harmoniously despite their differences and disdain for each other. It is just one rule, they do not mix and nothing must cross over the line that separates them.

It takes the path of a typical boy meets girl story except this time it is a situation set in unique world and they must find ways to overcome the social constraints without trying to run away.

For many, this is a story you might have seen before or probably, too many times. Several people were quick to point out the semblances in the trailer for this film to films like Klaus (2019), Gnomeo and Juliet (2011) and several others.

For someone who has seen almost all the titles that have been mentioned in the wake of the trailer release of AloeVera, the closest in semblance is a  2013 released South African short film titled KanyeKanye. Which according to its maker was also inspired by a Dr Seuss children’s book titled The Sneetches.

Anny Araba Sedufia, Associate Producer for AloeVera revealed at GhMovieCon2020 in January that the film was inspired by animation Gnomeo and Juliet (2011). It shouldn’t be an issue at all since every creative piece can be traced back to a source of inspiration.

Although there are some semblances in both films and the inspiration is evident, fortunately the films are not word for word, scene for scene the same. Peter’s film is certainly loosely also based on the ever so popular Romeo and Juliet story but like every fairy tale or fantasy he makes it his own and has added a unique touch that will appeal to many Ghanaians.

Aloewin (Aaron Adatsi) and Veraline (Alexandra Ayirebi-Acquah) begin to fall for each in other in the oddest of circumstances. Even under the watchful eyes of their parents who are the leaders of the two divides they are willing to break the rules just to get to be together. Forbidden to speak to each other they find a way to still communicate as their affection for each other deepens and that’s where things take a bad turn.

The writer does well to limit the story to the confines of the community the Aloe’s and Vera’s find themselves in. The dialogue does not reference or anyway hint the possibility of an outside world or any existence beyond their boundaries. You are immersed into the community and the lives of the people living in it. But you are left wondering about several things that are likely to distract your focus.

How do they survive? What do they do for a living? Do they trade or farm? Are they a modern dystopian society? Are they completely cut off from the rest of humanity and why?

But the story provides no answers to these questions leaving it all to your imagination and how far you can go with it.

The strongest part of this film for us has to be the near flawless art direction and production design. Aloe’s are blue and Vera’s are yellow and everything between is as nature would want it to be. The blend of blues and yellows is visual candy that you can’t seem to get enough in this film. The cinematography complements the art direction so much so that you appreciate the contrast that both colors provide and how they add to the film.

For a comedy the humor is more witty than brash and straight forward. You need to be paying enough attention to get the puns and how relevant they were to the scene.

What really holds this film together is an innate desire to see how it ends. It focuses too much on the two teenagers and the romance brewing between them and cuts out everything else. The onscreen chemistry between the two leads feels genuine and it tries to hold the plot together. But it would have helped if there were at least one or two subplots that could have broken the almost too predictable plot with some arches or twists.

Also, for us, we struggled to find and attach any symbolisms or artistic inferences to the situations or elements in this film. Not that this matters or anything to the average viewer, but we only seem to feel it would have better sufficed if this film with all the attention it would get over time found a way to cut a bit deeper into the minds of the audience. Especially those that might fancy being mentally stimulated whilst getting entertained at the same time.

The story goes straight the point and delivers a fairy tale romance, nothing more nothing less. If you are looking for anything more than that then you are most likely going to be disappointed. The only message it preaches loud and clear is that love will always find a way to unite us.

The biggest challenge for any filmmaker has to be finding the right story that people would love and be willing to see at all cost even if its inspired by someone else’s work. And then comes the challenge of making sure that your unique identity is not lost and you don’t become the shadow of someone else but in the end the love of film always wins.

We will score AloeVera 7.8/10 on our rating scale. It is satisfying and pleasing to watch but oddly doesn’t pack an extra punch that could blow us well out of the water. A classic Romeo and Juliet except this time with no tragic ending or no nerve wrecking twists to keep you at the edge of your seat from start to finish.

Regardless, OldFilm Productions have dared to break the mould with this one and have proven a point that there is indeed an appetite for well packaged Ghanaian films. Judging from how it has been received, AloeVera is poised to become one of the biggest films to be released this year if not the biggest. It is a must-see family movie. If you haven’t seen it already, make way to the Silverbird Cinemas as it is still showing.

If you have seen it already share with us your thoughts on in the comments section below. Also, you too can add your voice to our rating by scoring this film between 1 to 5 stars using the rating section below.

Everything You Missed At The ALOEVERA Premiere