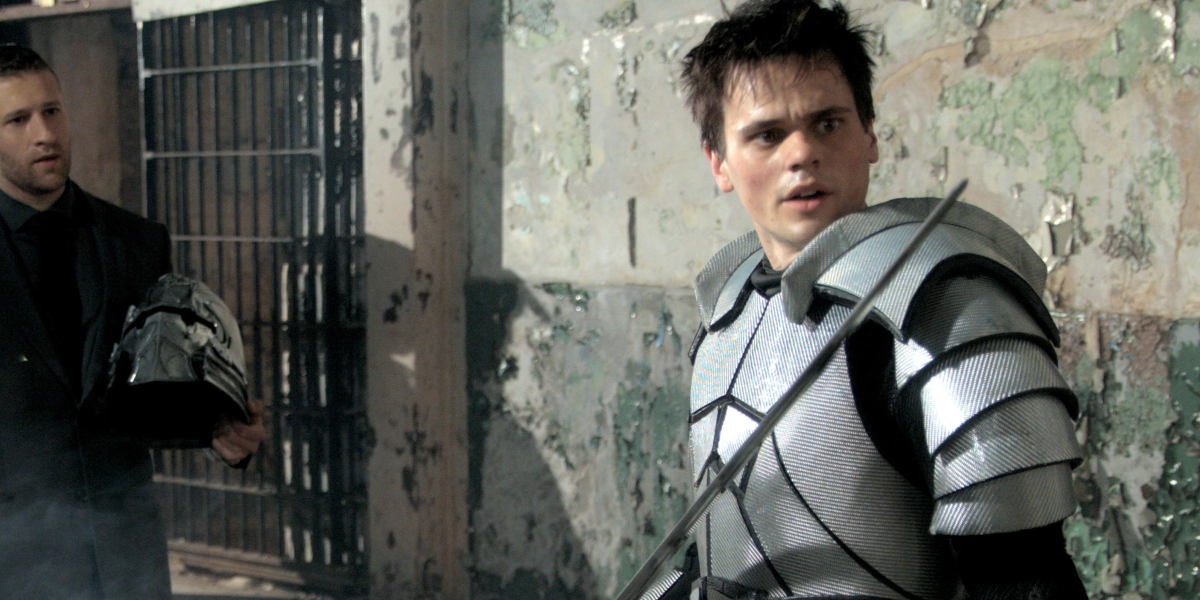 At the centre of the film is Nolan (Aaron Dalla Villa). A jovial young man working at a store that sells fantasy games. He receives a strange package one day, it is a Knight’s Helmet that links him to the ‘Noblemen‘, a mystical dynasty of knights who exist to fight the devil’s Apostles. When he first wears the helmet, Nolan sees unexplainable things and then blacks out.

Meanwhile, a demon has been let loose and seeks to destroy Nolan before he discovers who he really is; the next in the bloodline and the heir to the Noblemen.

Nolan is taken in by the Noblemen led by Corbin (Lance Henriksen). Together with his son, Vicars (Graham Wolfe) and Gabby (Rachel Nielsen) they try to train and prepare Nolan to conquer the demon. But Nolan doesn’t make it any easier for them, he seems not to be concerned enough about all that is happening and doesn’t understand why he is the chosen one.

The dialogue uses a lot of banter and amateurish witty clap backs intended to amp you up. This all contributes to the not so impressive overall quality of acting. Nolan for instance seems too childish and doesn’t exude any form of bravado even when you expect him to. And when he tries to, it isn’t believable enough.

Maybe this film was really meant to be a comedy and not to be taken seriously in any way. You find yourself occasionally laughing at some of the cheesiness rather than being appalled by it.

The demon is let loose when a burglary of a vault of artefacts goes wrong. It possesses one Blades (Philip N. Williams), one of the burglars. He now becomes the superhuman conduit that the demon uses for its rampage. Philip is actually a mixed martial artist so makes for a good choice as a villain for this film you would think.

Disappointingly the fight scenes can only best be described as basic. However, it works for the film and seems to complement the aura this film has. If you expect anything more, you might be very disappointed. The visual effects and CGI are also pretty much basic. For an indie film, such as this, it is almost impossible to go overboard with the CGI, the team simple made what they had available at their disposal work.

What really works for this film is the commitment to carry and see the story it’s telling right through to the end. Even when it seems like it’s getting a bit too dragged and annoying it sticks to its premise of Nolan saving the day, after all, he is the chosen one.

There is not much of a twist or any subplots that would have made it a little bit more interesting. Even the possibility of a brewing romance between Nolan and Gabby isn’t explored deep enough. Maybe that could have added a much-detailed subplot to the story.

Alpha Rift might be a fun movie but that’s all it offers. Maybe if it focused more on being a quirky slapstick comedy instead of trying to be a somewhat serious action/fantasy/sci-fi movie it would have been much more satisfying.

Perhaps it might be fun for a much younger audience who are familiar with fantasy games that may or may not carry similar storylines.

Movie Review: The Scrapper – Family Over Everything?