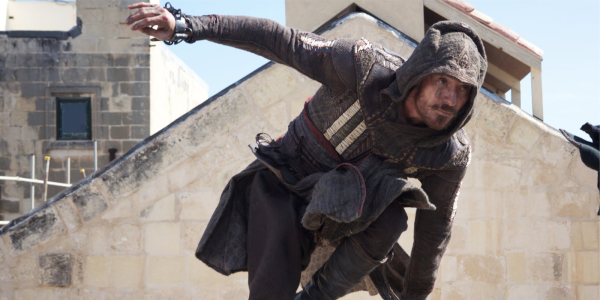 Only a few films are able to transition perfectly from video game themes to the big screens without leaving a trail of disappointed fans. Over the years we’ve seen a lot of such failures. So it’s become a bit of a wise thought to only go see a video game themed spin-off movie  expecting to be somehow disappointed. Assassin’s Creed on the other hand successfully failed at disappointing us.

The Assassin’s Creed games revolve around the rivalry between two ancient secret societies: the Assassins and the Knights Templar. The Assassins fight for peace with free will against the Templars who desire to establish peace in the world through control and the removal of free will.

Although this is a pure fiction, it passes for a very good plot that backs a very successful game franchise introduced in 2007.

In the film, a revolutionary technology that unlocks genetic memories is used to help Callum Lynch (Played by Michael Fassbender, most known as the younger Magneto in the last three X-Men movies.) experience the adventures of his ancestor, Aguilar, in 15th century Spain. Callum discovers he is a descendant from a mysterious secret society, the Assassins, and amasses incredible knowledge and skills to take on the oppressive and powerful Templar organization in the present day.

The plot for this movie is a very decent attempt at blending technology, fantasy/folklore and adventure without making it seem over exaggerated. Imagine getting put on a machine that allows you to experience the adventures and memories of your ancestors, how cool is that?

The story line is easy to follow and not confusing in anyway. Right from the start you can easily follow events and nothing seems out of place right through to its climax.

You don’t have to be a fan of the gaming franchise to enjoy this film. But you would certainly appreciate it more if you have ever played any of the games before.

The action sequence and fight choreography in this film can’t be over looked. You have Fassbender performing as Aquila in the 15th Century scenes and then delivering the same fight stances concurrently in the present day scenes whilst hooked on the animus (the machine).  The action sequence shows a lot of parkour that makes it more relatable to the video games. If you appreciate gravity defying fight choreography you would certainly love this movie and the action it portrays.

The visual effects are also impressive and very much enhances  as well as complements the cinematography used in this movie.  A lot of darkness and shadows that gives it the intense look and feel it needs to keep you immersed in the story line as it progresses.

For anyone not familiar at all with the Assassin’s Creed games, this movie serves as good introductory summary to it. It doesn’t bore you with some long origin story and several characters to follow. It just goes straight to the point and gives you a fair idea of what the entire game franchise is about and what to expect if you are considering playing any of the games.

Somehow, this film felt like Prince of Persia (Another video game spin-off) getting a dose of The Matrix. Although this was certainly much better than Prince of Persia: The Sands of Time released in 2010, you can’t help but mentally go back to it especially in the 15th Century Spain scenes. The comparison helps you to appreciate more the clarity of the story line of this movie and how well it was made.

Director Justin Kurzel in certainly on our radar now after seeing Macbeth (2015) also and we would love to see anything else he’s credited with.

Although we would have loved to have seen a little more backstory on the other assassins, the story line makes good use of those characters in completing the story. We can only expect that a sequel shows more about these characters. Especially, the character Moussa played by Michael Kenneth Williams.

We would certainly agree this movie was better cast and better made than any video game movie you might have seen in the past 5 years. It deserves a fair 7.5/10 rating as it did impress us enough to want to see it again and again.

The cliffhanger climax literally makes you wish you were seeing a follow up sequel almost immediately it ended.

We strongly recommend this title for anyone looking for a fun movie to see these holidays. Do well to leave your comments, feedback and opinions about this movie in the comments section below.