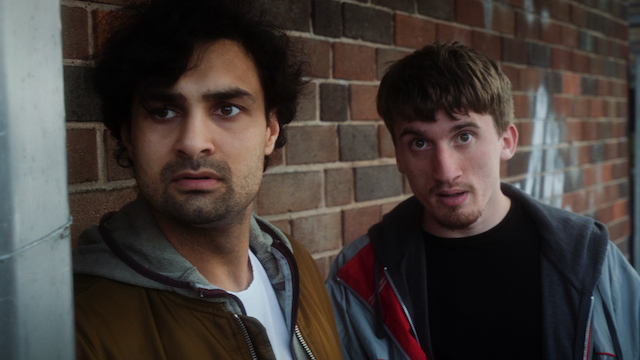 Danny meets an unsuspecting local junkie Cooks (Jason Adam) who he uses to deepen his cover.  Together they infiltrate the small towns cocaine and heroin network.

As an indie film, ‘Bluff’ delivers well on providing a backdrop for conversations to be had about substance abuse and the overall effects of drug business.

In this case, Danny gets very emotional attached to Cooks, they are able bond over past hurt and experiences with addictions. So, when Cooks dies through a forced suicide, he feels responsible for it and decides to avenge his death even if blows his cover and compromises the mission he has been sent on.

If nothing works at all in this film, it can’t be Gurj Gill’s performance as Danny. He depicts the role well enough. He holds a lot of the loose plot together with his delivery, and provides a character that does not only bring enough life to the story being told but one that the audience is forced to connect to. He is a broken man in many ways, but his bond with Cooks comes naturally and feels genuine. And in the final act of the film, he does more than great at selling to us a man delusional because of a loss of life he finds himself responsible for. He isn’t a loose cannon but he clearly shows that he has nothing to lose in his actions. His range of emotions is perfect for the character.

We see different sides of Danny as well, a clean shaved suit wearing drug dealer and an unkempt druggie. It takes a while to notice that the film shifts timelines showing a future and present almost concurrently.

The only person that knows he is undercover is his commander, Collins (James Jaysen Bryhan). He mostly shows up unexpectedly to follow up on his progress on the mission. He explains to Danny that even when he is being suspect to be a cop, he must remain calm and call their bluff. We see that happen at some point in this film and it works to save Danny’s deepcover.

The film despite its pace is dialogue heavy. If you close attention enough you would certainly pick up on the many messages that filmmaker Sheikh Shahnawaz is trying to deliver with this piece. And that adds up to the overall value of this film.

Shahnawaz succeeds at making this a subtle propaganda tool without overbearing the viewer with forced agenda against authorities that are supposed be responsible for ridding out streets completely for drugs.

By its end ‘Bluff’ feels more like a melo drama than a crime thriller with the way it shifts from being about an undercover detective on a mission to a man emotionally disturbed by the loss of a friend. Either which way you learn that living a life of lies always comes with a loss even if it’s for good reasons.

It isn’t just another film about drugs and addiction it is so much more in between and for that I would score it 6/10.