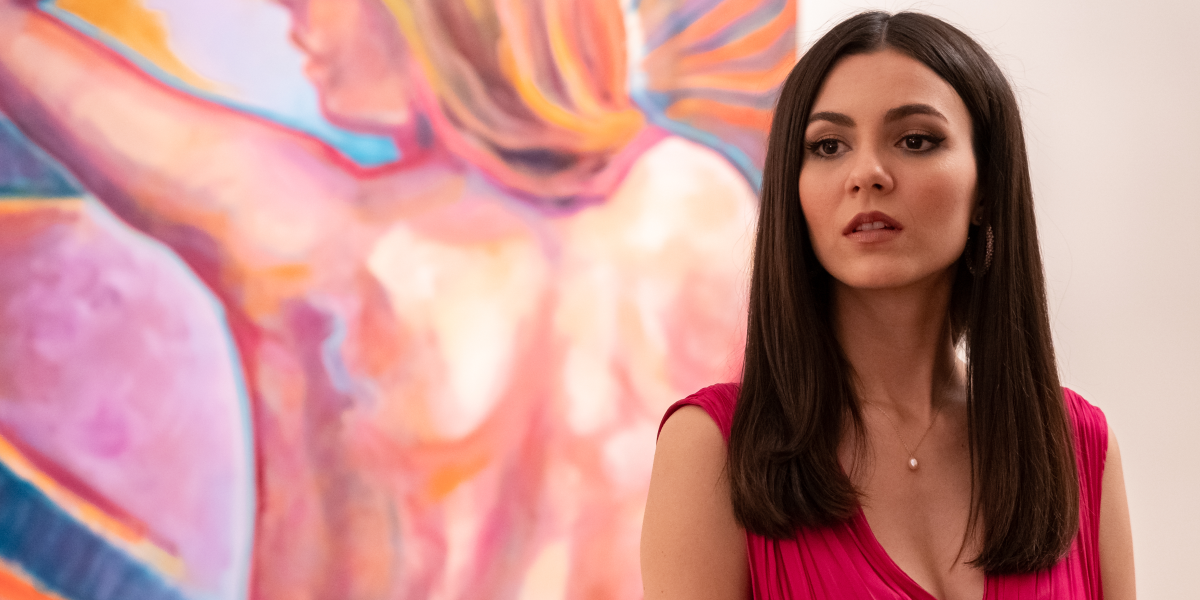 This film is an adaptation of the stage play ‘PUSH‘ by Kristen Lazarian. At the centre of this romantic drama is Brooke (Victoria Justice) an art dealer and her husband Owen a TV News Reporter (Matthew Daddario). Brooke begins representing a new Irish artist, Ansgar (Lucien Laviscount), a very charmingly handsome man who is a ladies man who can’t seem to keep his hands to himself.  Owen is also up to something that might involve someone at his workplace and that catches his wife’s attention.

They seem like a regular couple with not much excitement in their relationship. The spark in their romance might have died as a result of they both being very career-driven and constantly busy with their dreams and aspirations.

Owen feels somewhat threatened by Ansgar‘s charm and constant presence around his wife but tolerates it because that’s her job and he can’t interfere. Brooke on the other hand begins to question her husband’s trust once she sees some suspicious messages from a certain ‘Sarah‘ on his phone. And decides to keep a much closer eye on him. Things take a turn for the worse for the couple when Brooke jumps on a business opportunity requiring that she goes on a trip to France with Ansgar.

There is not much of a bond or romantic connection is shown between Brooke and Owen. Even as a married couple they never seem to be on the same page with anything. Although they appear happy and concerned about each other we never get to see the couple enjoy each other company and share moments that would make the viewer feel invested in their relationship so as want to make it work.

Throw a hot blonde in any relationship that is on the rocks and there is bound to be some infidelity. But why dangle the carrot in front of a rabbit and expect them not to take a bite?

‘TRUST‘ is indeed a conversation starter about trust and infidelity for any couple. By its end, you would definitely want to take sides with either Brooke or Owen for being the one at fault. And it is likely to have you doubting your partner and questioning their actions and inactions.

Would you go as far as testing your partner? Or spying on them? What breaks trust in marriage? A few texts messages or suspicions of infidelity? This film interestingly allows you to put yourself in the shoes of either of the two main leads trying to find answers to these questions. You can’t help but wonder what you would have differently in any of the situations that they each found themselves in.

Visually, the film somewhat looks and feels like a TV movie except with much better art direction, cinematography and editing. Everything and everyone looks good in this film making it appealing to watch.  For a romantic drama, the mood and the vibe are set right. But you never get to see enough steamy and raunchy romance that you might be set up to expect.

Brian DeCubellis makes this simple story (his second feature film attempt) a bit winding and complicated. The revelations are played out in a nonlinear approach taking the viewer back and forth detailing events from either Brooke‘s or Owen’s perspective. This pretty much saves the film for me. The otherwise boring screenplay would have easily worn any viewer out regardless of how good it looks.

However,  some clever twists in the narrative that you only figure out by the end of the film make for some decent writing. Other than that, a lot of the happenings come off as very predictable, quite a cliche or somewhat basic. That’s why I would score this film 6/10.

TRUST is available now for streaming on HULU starting June 10th. This is certainly something you should watch with your significant other if you are ready for a tough maybe unhealthy debate over the subject of trust.