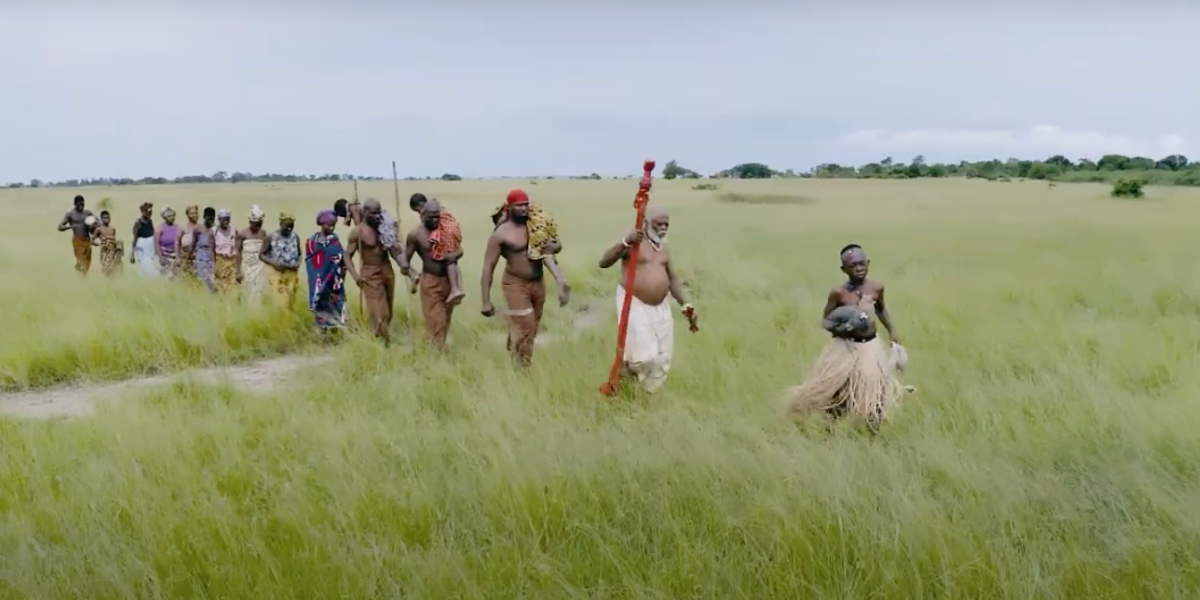 Regardless of the challenges COVID 19 is posing to our film space some filmmakers have still dared to tell stories that need to be told. D.M.F Productions premiered Ogbozo: The Taboo Kingdom a couple of weeks ago and I finally got to see it.

The film opens with a voiceover narration about how the transatlantic slave trade started in 1488 leading up to the formation of Ogbozo Kingdom. And that is followed by a scene where a child captured and taken away whilst playing amongst his peers.

The tone is set well for what to expect; a rollercoaster ride about the ills of outmoded customary practices that encourage slavery. The film seeks to explore the adverse effects of traditions and customs on the dynamics of growth and change in modern society. All this is shown through this fictional story about Kojo and this taboo kingdom called Ogbozo.

In Ogbozo, Kojo (Andrew T. Adote) after years away in the States returns to his homeland with a quest to strengthen old family ties. He embarks on a trip to his home town in search of his grandmother who is the only connection left to his true heritage. But the trip becomes a fight for his survival and the freedom he has enjoyed all this while.

Kojo has lived most of his life abroad and now serves in the army. He returns home intending to connect with his past oblivious of his family’s history and whatever risk that has on his life. He returns to meet traditions and customs that he is alien to.

It is interesting how Kojo can find his way straight home to his grandmother after many years of being away and losing touch with the realities of his past. After she reveals the family history to him, Kojo decides it best he takes her out of the kingdom to prevent any harm from coming to them.

But Ogbozo the deity has its plans for the returned son of the land. He is put under a spell that renders them incapable of escaping from the land.

Before Kojo embarks on his trip to his homeland Ogbozo, he connects with another expatriate Laura (Kristen Adele) and a fellow army mate Owen (Peter Ritchie) who later prove to be his only chance at escaping captivity.

The story soon turns into a confusing bureaucratic fight over what is wrong and what is right when Kojo’s United States citizenship is finally revealed. Would his fate have been sealed if not for the involvement of the united states?

After a while, Kojo doesn’t seem to the central character in this film. As the protagonist in the story, as introduced to us from the start, he is surprisingly relegated to the back of the story even though everything seems to be revolving around him.

At some points, it felt like watching two separate movies that are somewhat interconnected. In the same kingdom, there is a family that is afraid of incurring the wrath of the Ogobzo, so they kill and dispose of their daughter Etornam who is sickness they can’t explain.

The film combines Akan, Ga, Ewe and Yoruba for the dialogue. It is not revealed to us what country the story is set in exactly. And it is not made clear exactly which is the official language of the people of that Kingdom. For a work of fiction, that shouldn’t be much of an issue but for anyone who understands any of these languages and is familiar with the ways of life of the people who speak these languages in Ghana, the confusion in the stories setting becomes even more glaring. You are left wondering if the people of a particular tribe practice some of the customs and traditions eluded in this film.

Writer and director, Destiny Omon and his team manage to drum home the idea of the remoteness of Ogbozo from the rest of the country with the visuals used to establish the setting of this forbidden kingdom. There are visually pleasing shots of hills, green vegetation and a long stretching river that you are required to cross to complete your journey to Ogbozo.

For me, it felt as no not a single moment of fear was properly communicated in the film. Per the story, the people fear the deity Ogbozo, but the full extents of his wrath are never shown or explained. Perhaps, it would have sufficed if a stronger explanation was given to why the belief systems of the land had been upheld for so long.

At one point the king of the land and the chief priest indulge in a debate about the traditions and customs of the land, but no meaningful reason is given for why those customs and traditions are important to the ways of life of the people. What benefit do the people of the community derive from this deity and adhering to its rules and demands?

I would rate this film 6.1/10. It is a decent attempt at exploiting the subject matter but it doesn’t provide a clear enough representation of present-day society and happenings that are backed by unexplained by traditions belief systems. It comes off more fictional and conjured than real, making it bit more difficult to appreciate.

It is also not clear what the film seeks to say about spiritualism. Even when Kojo and Owen decide to destroy the shrine of Ogbozo after they had been freed, they choose to go get themselves fortified by a goddess. A goddess who is as powerful if not more than the high priest of Ogbozo.

Etornam’s return after being perceived dead is not well explained either. Does she return from the dead after being killed and disposed of in the river? Or was she never really dead?

It is obvious Destiny has a wild imagination just like every creative person, perhaps what’s missing is the connection with the audience like me who are fully yet to understand the depth of his work.


Make sure you watch Obgobozo: The Taboo Kingdom when you get the chance to as it raises some genuine questions about our customary and traditional belief systems.