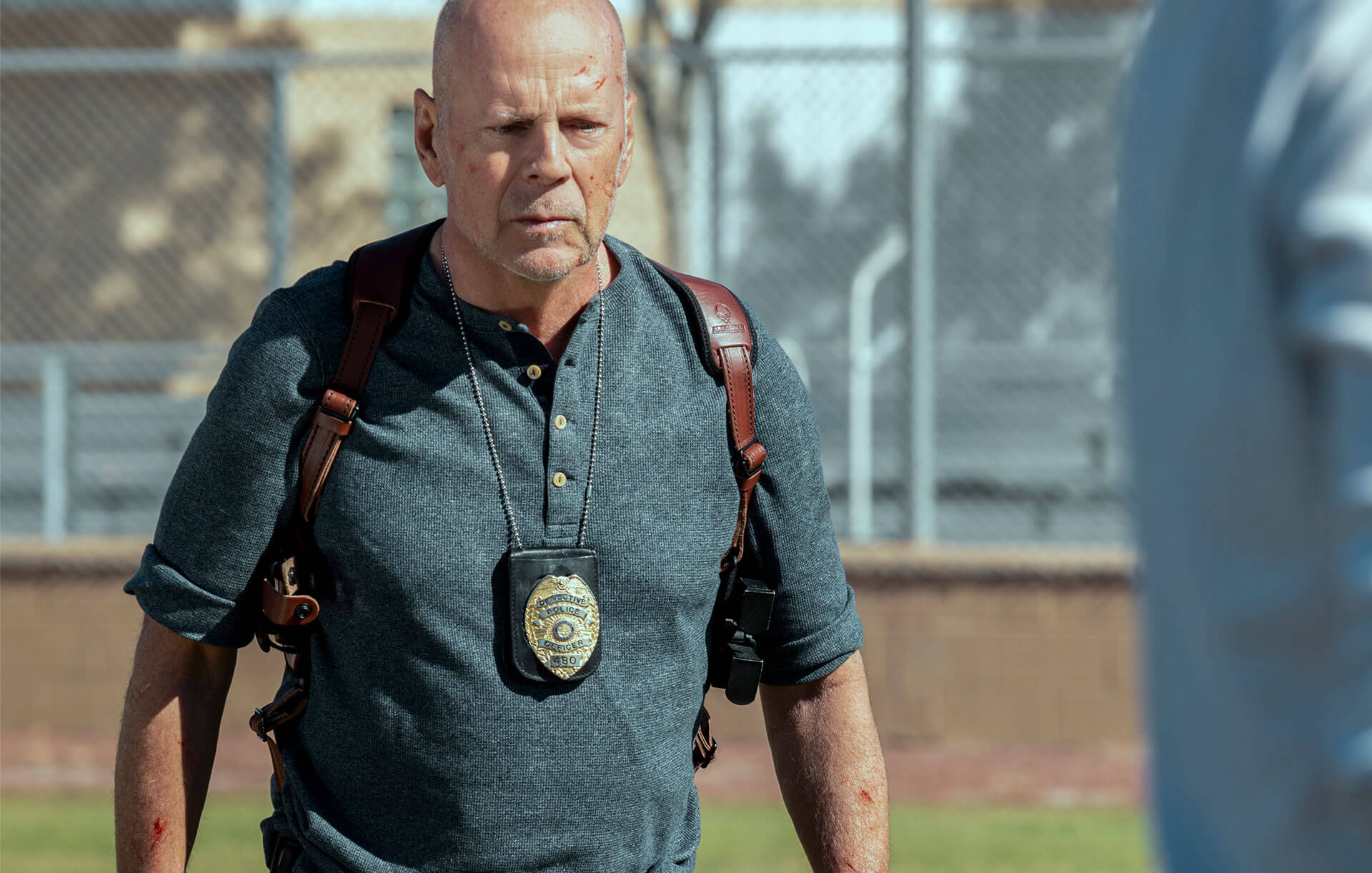 But just like the other two films, Bruce is almost like a supporting lead that isn’t there to take all or any of the shine in this film.

This was supposed to be the first of the trilogy but ended up being the last instalment. Detective Knight: Independence is a crime story about a rouge EMT who pretends to be a cop to rob banks.

The film starts with a scene of a bank robbery, the cops show up and then there is a gunfight and the robbers get killed.

EMT Dezi (Jack Kilmer) and his colleague Ally (Willow Shields) arrive on the scene to see the carnage. It immediately registers with him the power the LAPD seem to wield. After all, he has always wanted to be a cop himself. As much as he tries to get close to the officers he is shunned and disrespected.

Dezi seems to lose his mind and decides to go down a path of self-destruction. Hype on the words of a YouTuber he is obsessed with watching, Dezi begins to be believed that he is the ‘angel of justice’ that society needs. In essence, he has to be a vigilante to ‘protect and serve’ his way. He starts to impersonate a police officer and then eventually ends up committing crimes with the uniform and badge that he is supposed to respect and honour.

Jack Kilmer essentially is the main character in this film. And he owns the role with his performance as Dezi. His confusion and conflicts are seen. He is a frustrated man who becomes dangerous to not just himself but everyone else.

The story follows Willis’ character Knight as he works to stop a young man, Dezi, who is impersonating a police officer to rob banks, and who has a personal connection to Knight’s daughter.

Considering that this is Bruce Willis‘s last film he acted in before announcing his retirement from acting due to aphasia, you would somewhat expect to see the veteran taking a bow or exiting the stage with a huge bang. But that is far from the case here. You could say that his character is very much underused. Excerpt for being the main link to the other two instalments in the trilogy.

Fortunately, you do not have to even remember the other two films to be able to watch and appreciate this one.
The film also stars the likes of Jimmy Jean-Louis, Lochlyn Munro and Timothy V. Murphy.

The film raises questions about the morality of violence and the thin line between cop and criminal, law and vigilantism. How far can you go to stop crime? And when does the enforcer of the law also become a criminal?

I would score this film 5/10. As the final bow out for a veteran of the action, crime thriller genre this film doesn’t pack the punch you would expect. But given the circumstances that led to this being possibly the last Bruce Willis film we ever get to see; it is commendable that the makers had to give it all that they could to make sure that it finished and released.

As a simple crime story that focuses on helping identify the line that separates good and bad cops, Detective Knight: Independence is a decently made low-budget film that works.