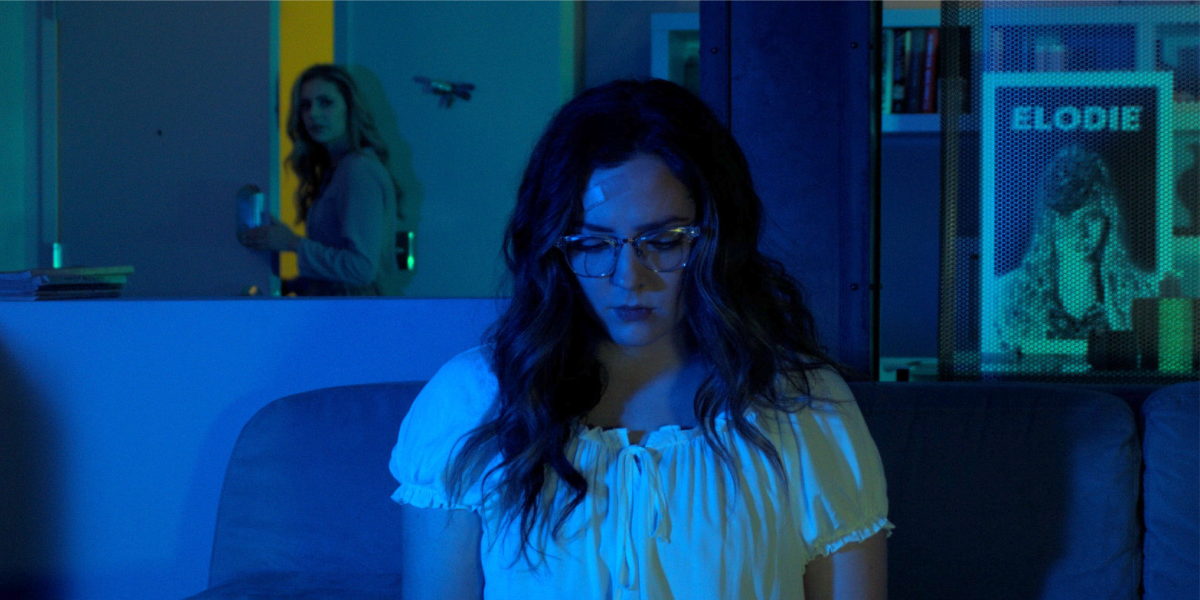 Writer/Director Daniel Ziegler offers an artsy introspection at failure and how to overcome it in a story about looking beyond public perception to achieve personal satisfaction. ‘Elodie‘ is not just art, it is brilliance.

Faith Decker is at the centre of this film as Sabrina Stone, a young playwright and actor. She is introduced to us as a passionate creative looking to make a name for herself in the world of theatre. Whilst she struggles to finish writing what she believes to be a masterpiece, she equally struggles to find the right person to play the lead role of Elodie. She decides to play the role herself. Her boyfriend (Ian Holt) calls it quits on the relationship on the night of the play even though they both have to play love interests on stage. She spirals out of control during her performance causing the production to have an abrupt end leaving her audience disappointed with the play.

Burdened by the failure of the play, she finds herself slipping through her thoughts into the fictional world she created for the play. She starts to see and be able to interact with the characters she created. All her insecurities and fears come to bear in that world as she tries to help Elodie save her kidnapped sister, just like in the script she wrote for the play.

The acting in this film is very commendable for fairly new faces. They each owned the characters and delivered well on their roles. More commendable is how fluidly they switch between playing the characters in the real world and the characters created by Sabrina for the play. It would be important to note down these actors to see what else they end up starring in.

It is also brilliant how the fictionary world created by Sabrina is separated from the real world using black and white imagery so you are not left confused as to where she is at any point in the film. You feel the surrealness and the cold emptiness world once the story shifts there. Even with the way the scenes are captured, you are sold the idea that those characters are the only persons existing in that world although it has the same sights and locations as the real-world Sabrina exists in.

Elodie clearly is an artsy piece from the way it was shot and edited. Besides the creative choice of the noir styled black and white, the film also uses some very stylish colourful streaks of light, hues and silhouettes that are very pleasing to the eyes. All that is accompanied by the right choice of sound score and mood music to convey exactly what state of mind the characters are in at each point in time.

The film itself through all the art and drama is a great conversation starter about failure, how people handle it and the physiological extremes its likely to take us. Ziegler artistically weaves all this together in this unique idea that was well executed blending surrealism with reality. And it pushes a narrative that makes for a healthy discourse about what constitutes failure or success.

In Sabrina‘s mind, what she set out to do was a complete failure. And she crumbles under that pressure. She mentally searches for satisfaction and fulfilment not for herself alone but the characters she created as they too seemed to crave some form of resolution.

The film’s climax shows Sabrina‘s fictional story reaching a resolution that appears to be satisfactory to her and her audience. Finally, she feels fulfilled and successful. But is it all real or it’s all just in her head?

I would rate Elodie 7/10. It starts as a slow burner that it is enough to test anyone’s patience but then, just at the right time it morphs into an intense twisted noir. You will appreciate the progression even more provided you are giving it all the attention it deserves.

‘Elodie’ is a beautiful maze that your mind would love to explore if only you allow it to. If you appreciate artsy films, this is something you must see. You too can check out ‘Elodie‘ as it is available for rent or purchase on Prime Video. Hopefully, you would enjoy it as much as I did.

Do well to share your thoughts on this film in the comments section below if you’ve seen it.