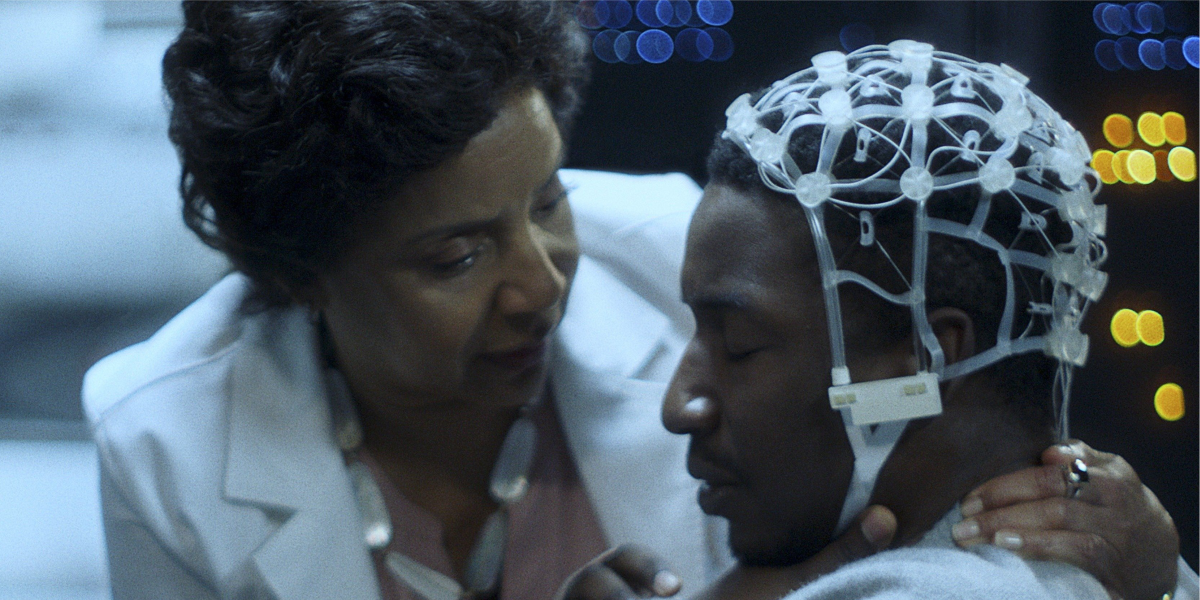 Arguably, the best horror films are the ones that alter your perception and find a way to confuse reality. Although ‘Black Box‘ doesn’t fit well in the horror genre, it confuses you enough to leave you scared and a bit confused at the edge of your seat. As a Sci-fi film and that makes it worthwhile.

The film shares some similarities with Jordan Peele‘s Get Out as well as some other films but this truly feels like a unique film the way the story is told.

In “Black Box” Nolan is struggling to regain his memory after surviving a tragic car accident. Desperate to return to his former self while trying to raise his daughter, he decides to try an experimental treatment by a renowned neurologist. He is introduced to the “black box” after which his world begins to get more complicated and more cloudy.

Mamoudou Athie (who plays Nolan) is a delight to watch in this film. As the lead, he’s phenomenal, to say the least right through to the end. He depicts the confused groggy father trying to recall his past. He does so with so much easy and equally nails it when Nolan switches to reveal the person inside him.

It is also commendable that almost every notable character in this film is a person of colour. Showing that more interesting scenarios can be told even in African settings besides the most obvious scenarios.

Phylicia Rashad is the most seasoned in the lineup of actors assembled to make this film. Although her experience shows in her performance, she doesn’t outshine any of the others starring in this film. She manages to awe you playing a character that you find yourself loving from the beginning of the film and later despising.

The drama is intense. Not only are we taken along on a journey with Nolan trying to find himself. We witness the strength of Ava as she has to struggle the challenge of dealing with a father who is not sure who he is. The bond between father and daughter is shown uniquely. Ava although barely ten years old is constantly looking out or his father and helping him navigate the complexities of the life that feels very unfamiliar to him.

What provides an almost immediate scare is the sight of the ‘Backwards Man‘, a mysterious looking faceless contortionist that lurks around in Nolan subconscious any time he is put into the ‘black box’. But as the story progresses you get to find out what more about the mysterious creature and how it relates to Nolan’s memories.

Just like most science fiction films, the science backing the story is difficult to fathom. Fortunately, there isn’t any attempt to bore you with any confusing dialogue trying to explain or make meaning the science behind what the story is about.

As the film builds up to the 3rd act, you find yourself engrossed more in putting the pieces together just like Nolan as he tries to discover who he is. The twist in the plot feels almost predictable, yet it works a lot for the story.

As a Ghanaian, I am eager to see more from director & writer Emmanuel Osei-Kuffour. Even with a digital release, he has his foot in the door with this debut. I wouldn’t hesitate to see anything else he touches to follow his growth.

Besides its somewhat brilliance and steady build-up, the climax felt a bit too forced. Almost immediately, Nolan’s friend Gary (Tosin Morohunfola) and his daughter Ava (Amanda Christine) almost figure out that Lilian is up to something unethical that isn’t in the interest of restoring Nolan to normalcy. We are not given enough details as to how exactly they can come to that deduction.

Black Box is not only intense and intriguing, it is very enjoyable and well-acted. Although it is slow-paced, it doesn’t feel boring or too laid back. I would score it a well-earned 7.5/10, for a debut Osei Kuffour is off to a right start.

This film is one of the titles released as part of Welcome To The Blumhouse series from horror film giant Blumhouse. Head to Amazon Video Prime to check this one out.