Movie Review: Exodus:Gods and Kings 2014 *Kings Are Made By God* 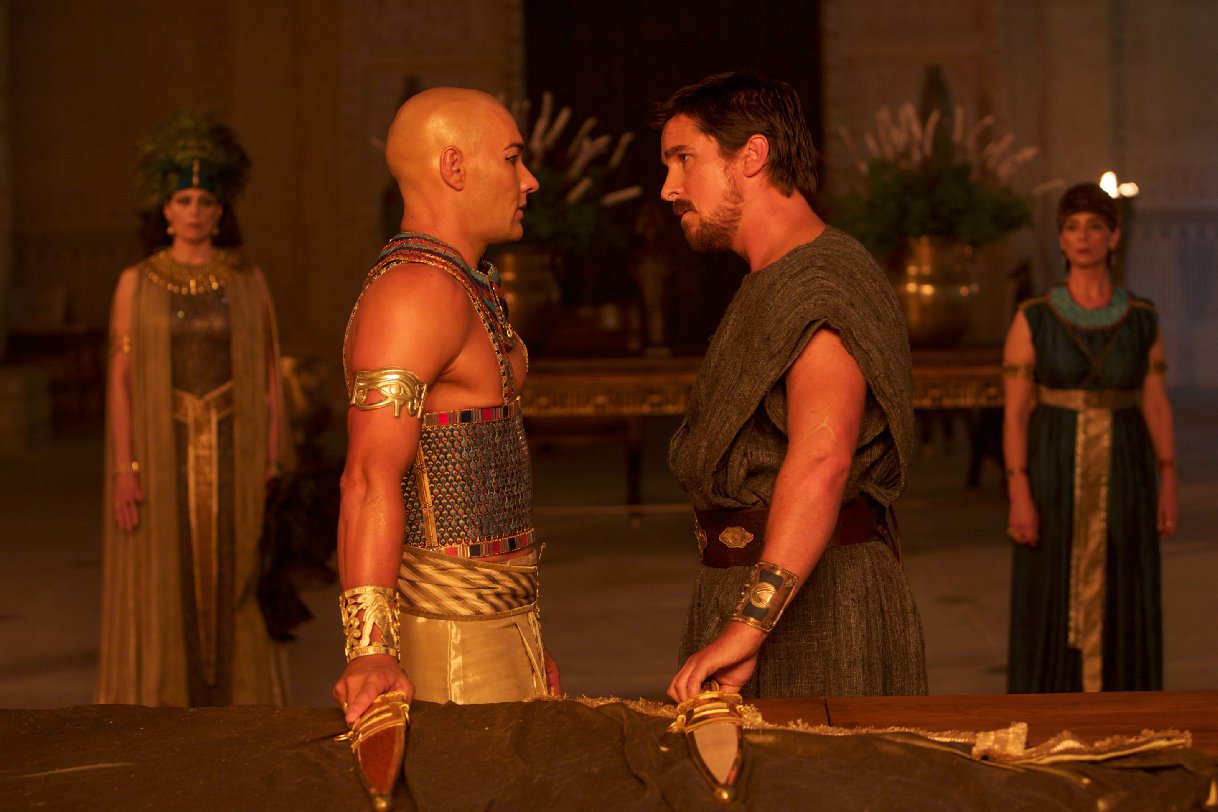 Arguably, this could certainly be one of the most looked forward to movies for 2014. Personally it couldn’t have skipped my priority watch list. (Checkout my TOP FIVE movies to End 2014 with)
A lot of noise had been made about this title pending its release. I remember exactly how stunned I was after I first saw its trailer months ago. It looked very promising and I would believe that anyone else that saw the per-release trailers had high expectations for this movie.
In April this year, Noah was released and received with mixed reactions and comments. Personally, it did leave a very sour taste in my mouth and I could only hope that Exodus would be much better.
I would describe both movies as spin-offs of very well known bible stories told with huge Hollywood budgets.
Exodus tells the story of Moses who rises up against Egyptian Pharaoh Ramses in a bid to set free 600, 000 Hebrew salves.
I believe this is a very well known bible story for not just Christians but non- believers as well. Everyone might have heard off or is familiar with this story. (Well if you haven’t then it’s never too late to start reading your bible).
I had very high expectations going in to see this movie, so much that I couldn’t afford to miss the first day showing and certainly wasn’t bothered about the close to one hour delay before its start. (The delay was well explained and made a lot of sense anyways). I would say… I as much as I did enjoy watching this movie I wasn’t totally impressed or blown away entirely by it.

This Ridley Scott (Famous for directing Gladiator and Black Hawk Down) directed movie had a lot of things right. Most noticeable of these was the casting. I feel it was a very wise move casting the affable and talented Christian Bale (Three time Bruce Wayne\Batman for Christopher Nolan’s Batman Trilogy) for the lead role of Moses. Anyone who is familiar with Christian’s works would possibly fancy the idea of seeing him in something of biblical precedence. I feel he did justice to this role and really did embody the Moses character in all sense. I dare say that he did a better job than Russell Crowe did playing Noah. (He had originally been cast to play Noah but couldn’t because of scheduling conflicts) Joel Edgerton who I remember very well from the 2011 hit Warrior also gave an equally stunning performance playing the Pharaoh Ramses on the other side. I loved his cold looks and demeanor. Other supporting casts including, Ben Kingsley, Aaron Paul and John Turturro did add some spice to it. I was hoping to see Aaron Paul (Need for Speed) in a much bigger role though. Besides that I cannot in anyway fault the casting. Even the child actors were spot on.
I also liked the fact that the movie did not have to start with the story of the birth of Moses and how he grew up living under the roof of the Pharaoh. The movie just sets off with a full grown Moses and Ramses going into a battle for the Egyptians. Taking the story from that point upwards was very necessary considering that it lasted a total of 150mins, other than that I believe it would have been either much longer or much lighter in terms of the dept of the adult life of Moses.

I was also impressed with the visuals. The makers did not make use of excessive graphics in terms of setting so the whole scenery looked real and believable to a large extent. It was very much pleasurable seeing all those buildings and ancient Egyptian construction work in such detail. I was taken to Biblical Egypt and back. Entirely, the 3D viewing was OK and not too over done even though it did seem quiet unnecessary at some points.
[This Point on wards may contain some minor Spoilers] Pardon me…..very necessary for the sake of this review.
What I didn’t like most about this movie was, just like Noah, it seemed to have strayed or been rewritten from what is popularly known or expected. That is why I would describe them as spin-offs. I believe everything the bible says to be fact and not fiction so would certainly find it uncomfortable accepting anything that tends to depict or demonstrate otherwise. I don’t seem to get why they can’t just make the movie as it has been told in the bible. I don’t remember Mel Gibson’s The Passion of The Christ having any conflicting ideas or contradictions with what the bible says about the death of Christ.
I might not be a theologian or anything close to that but I do not remember the bible saying or expressing anything like Moses’ encounter with the burning bush as a dream or him inscribing the Ten Commandments with his own hands. Neither did it mention anything like God constantly appearing to Moses in the form of a young boy. I would want to believe there is reason for these contradictions but then they would not be justifiable nonetheless. For the sake of the truth (The Bible) can’t these stories be told just as they have been written and expressed in the Good Book?
Disapprovingly, I feel the story tried to provide mundane explanations for the Plagues that God sent upon the Egyptians. Besides the graphical representations of these plagues being quite good they certainly lacked accuracy which sort of downsized the efforts put into interpreting those parts of the story.
Surprisingly I was hoping to see Moses and Ramses actually have a go at it: one on one, but that didn’t happen. I think the trailer led me to expect a lot of fighting and some epic battles (I am a huge fan for battle scenes) so I was hoping to see a lot more of that.

I would rate this movie 6.5/10 only because it was nice to watch and enjoyable but certainly not as mind blowing and wowing as I had initially anticipated it to be.
I sensed that a lot of the people who also saw the movie at that time were also disappointed to some extent. Most noticeable of them was Ace Ghanaian Record Producer and CEO of The Last Two Music Group; Da’ Hammer who was obviously very disappointed by the movie.
Regardless, I would agree with anyone who says that this was a far better movie that Noah and I would most certainly want to watch this one again. (I have watched Noah only once and have no interest in seeing it again.)
It’s Christmas and for anyone who wants to do anything other thing besides the usual eating, drinking and partying I would gladly recommend you go spend some time (and money) to see this movie. It is worth it.
My only hope is that the next biblical big budget Hollywood venture doesn’t associate with the need to provide contradictions and conflicting backdrops to maim its success.
Merry Christmas.
Do well to go see this movie too.

Movie Review: The Hobbit; Battle of the Five Armies 2014 *The Defining Chapter*