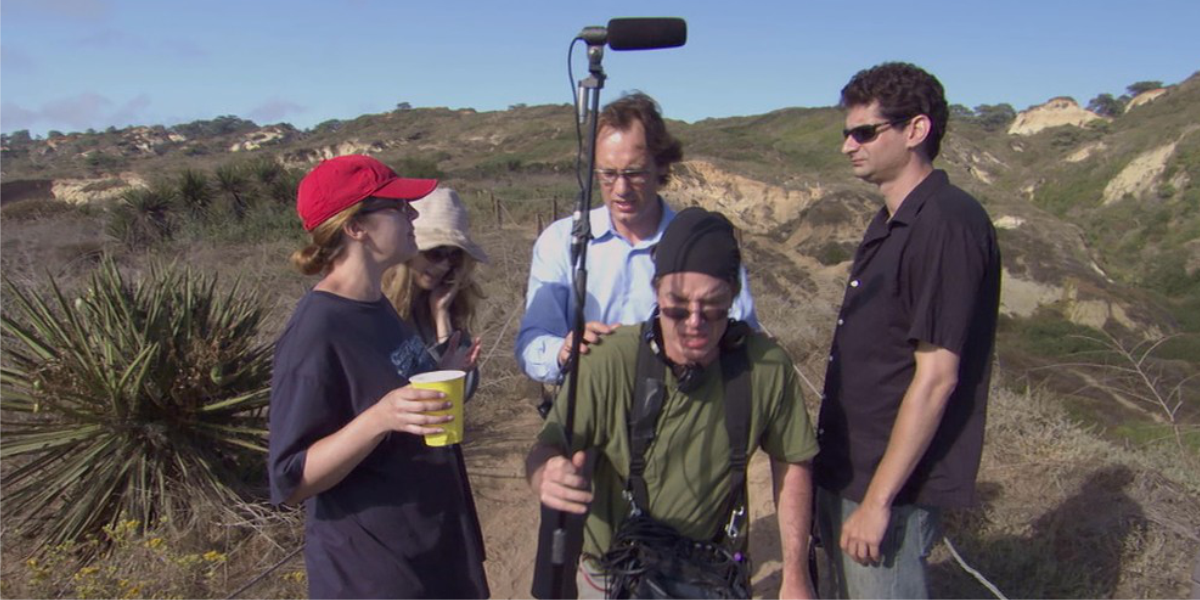 Fell, Jumped or Pushed is a hilarious satire that highlights the struggles of indie filmmakers with a mock-documentary style whilst telling a bizarre real-life story.

Empowered by a self-help book by filmmaker Ivan (Andre Belgrader), Todd decides to make a documentary film about women empowerment using the women in his family as the subjects. He recruits some of his old school mates after meeting them at a reunion to help make the film. Ivan himself an acclaimed filmmaker after hearing about Todd’s plans decides he can’t afford to miss this train wreck. He proceeds to also make a documentary about Todd, his inexperienced team, and what could be a disastrous attempt at filmmaking.

The interview crew themselves become subjects of an interview and the chaos unfolds. The characters in this film are naturally goofy. Without trying to be outrageously funny, they each deliver characterizations that are humorous, enjoyable, and entertaining. They are each flawed and not perfect in any way. You get to see more of their craziness unfold as their production gets hit by one obstacle after the other. You also get to see the characters form unique individual bonds with each other as the days pass.

The suspension of disbelief is in full force here. You are constantly left guessing if the characters are creating a real documentary or it is all scripted to take up all your time. Todd and his gang bring to play all the chaos that is most typical with zero-budget indie films anyway. Inexperienced crew, shortage of funds, clash of creative ideas, and personal issues constantly interfering with shooting plans. You don’t even have to have had any experience with happens behind the scenes of filmmaking to appreciate the accuracy captured in this mockumentary.

Writer/director Todd Peters delivers a solid lead performance as Todd in this film. He is inexperienced, clumsy, and amateurish in his actions. Yet very passionate about his craft.  He doesn’t seem to have a plan but he appears confident in his idea and is committed to seeing in through even regardless of the many challenges he is sure of facing. Soon enough, he is muscled out of control of the team by his cousin Marcy (Blair Sams) who also has no proper experience in filmmaking. She figures the documentary they are making should focus on the story of Sgt. Elmo Warrick’s disappearance, which has been an unsolved mystery in the family for years.

Besides the seemingly existing sibling rivalry between Todd and Marcy, there is enough drama in all the chaos to keep you entertained. Each member of the crew is seen trying to navigate their journeys in life, either trying to identify what their purpose is or seeking the right partner that completes them.

‘When the filmmaker becomes invasive the subject becomes evasive’…. Even with all the chaos and confusion happening, the film manages to drop some nuggets that would be very informative for anyone passionate about filmmaking.

It’s clever how this film leads you on, subtly telling a story it swears from the beginning that it is not telling. And the actors make it easy to digest it all. I would score this film 6.5/10, it is fun to watch, easy-going and absolutely worth the time spent on it.

Fell, Jumped or Pushed is one of those movies that you don’t have to expect much from. But it is not a waste of time at all. The story is told in a playful nonserious way serving you an honest laidback comedy that you will love to see more than once.