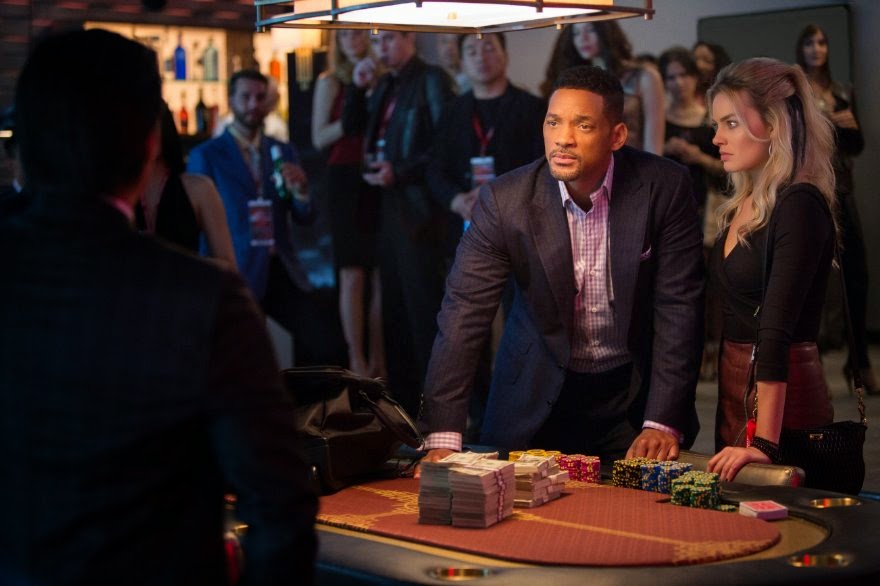 It’s been a very long while since I reviewed anything. I must apologize…. New work schedule keeping me awful busy but I am loving it… regardless.  It’s been a very busy past couple of weeks but I finally got some time on my hands and decided to see a movie to help de-stress.

Focus tells the story of a con artist who encounters someone from his past on his latest scheme and how things get messy thereafter.

On the surface this seems more like a very simple plot… something most people would most likely over look and might not be so interested in seeing.  But then if you know Will Smith…. You certainly would be interested in seeing this movie. Yes… that was one of the “pluses” that aided in me choosing to see this title over Jupiter Ascending. He starred alongside Margot Robbie from The Wolf of Wall Street.  Considering that Brad Pitt and Ben Affleck both turned down the chance to play the lead role in this movie after Ryan Gosling had dropped out I feel Will Smith did save the day  otherwise this would have been a very good movie gone to waste.

Anyone would easily agree with me that this could be Will Smith’s most looked forward to movie since 2013’s After Earth which was a huge Hollywood miss.  For me it was considering that I hadn’t seen him in any major lead role since After Earth.

This title didn’t pack that much of a huge cast or popular faces surprisingly. But it was certainly worth the time I spent on seeing it. (My time matters more to me than the money spent on tickets lol).

The script was perfect…  I have always thought it must be extra work writing a script about con artist and their modus operandi.  After seeing movies like Catch Me if You Can, Ocean’s  Eleven, American Hustle and MatchSick Men  (Several others as well) I had a fair idea of what to expect going in to see focus. But in the end I was more than impressed with the movie.

Focus had a very sophisticated -high end feel to the whole idea of con artistry. Something I don’t remember ever experiencing or noticing in all the other con art movies I mentioned.  The story line was not only just too clever as you would expect for a movie of its kind but also certainly had a lot of unexpected twists.. Not to mean it was hard to follow.. but most of the scenes just leaves you “Oh I didn’t see that coming”.  Very unpredictable….for me that is a good thing in any movie. It was almost like getting myself coned in most parts of the story. A script is always as good as how surprising and unexpected the turn of events are as the story unfolds.  I can’t fault the story line in anyway. It just had me interested from start to finish. From the very impressive pick-pocketing up to the mind startling intellect scamming. It’s not always that you get to see conning made this much appealing and enticing.  Beneath it all you get to have a clear picture of how clever and smart you would need to be in order to be a successful con artist. (Not that I believe anyone would want to be…lol)

The entire movie kept a calm and steady pace from start to finish. If you are looking for some daring action sequences in this one don’t expect to find any because the story didn’t have the need for any of that. One thing that it did have was a little tiny bit of romance. Not the corny, cliché kind… but it definitely did add some weight to the context of this movie. Half of the time I found my subconscious debating over if it was really love between Will and Margot all just part of the con.

My only problem with the movie was the fact that it was classed comedy. In no way do I see this movie under that category at all. And neither can it be classified as a Romantic Comedy.  Certainly it did pack some scenes of very mature and clever humor that are almost very easy to miss but it also certainly isn’t the type of movie that would leave you holding on to your ribs whilst trying not to die from laughter. If you expecting to go to this movie to be cracked up good get ready to be disappointed in that area.

In all I was very impressed with this movie and I am glad that Will has got his groove back after disappointing us all in AfterEarth.  I won’t   hesitate to score this title 7.5/10 because it certainly did its job of helping me de-stress. I will definitely love to see this movie all over again.