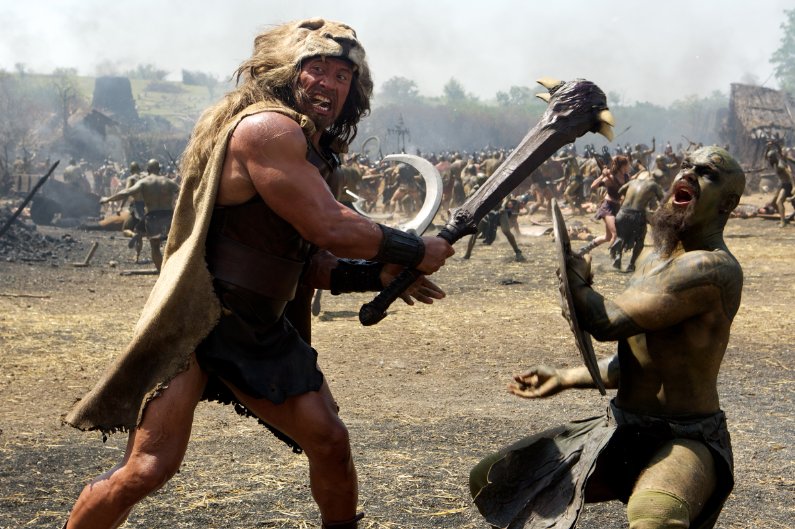 After all the noise, Hercules, starring the famous Dwayne “The Rock” Johnson has been released and I must say it did live up to expectations. Well not in all areas but it wasn’t a complete failure at least. Pre-release date trailers promised a look into the life of the Legendary Greek Demi-god after he had completed his twelve labors and now lives his life as mercenary who is hired by the King of Thrace and his daughter to help in defeating a tyrannical warlord.

Before watching this movie I wondered if 98 minutes were enough to completely tell this story. The movie starts with an almost slow motion comic footage of Hercules doing his twelve labors. This I guess was necessary to a set up the main story that was going to be told without having to bore viewers with the earlier life of the main character. I think the writers made a huge gamble with this capitalizing on the surety that the tales of Hercules are not really new to anyone. Although it does not ignore the back story of his wife and kids it does tend to play with already popular knowledge about him and sets up the viewer for events and questions that would later be visited and answered at the climax of the movie.

I was impressed with the idea of telling this story with a much more mature Hercules and not some young over zealous yet inexperienced hero. I feel that Dwayne Johnson did deliver on that. I have no idea who else might have been offered this role but if Dwayne was the first pick then the casting was definitely on point. For me a younger teenage Hercules would have been a huge minus to this movie. The long hair and beard did well to complete the image of our otherwise bald and clean shaven real life Dwayne.

I was also impressed with the fact that film makers did not make use of too much CGI (Computer Generated Imagery) but actually shot the movie with actual humans and real props making the fight scenes much more realistic. Oh YES, there are some epic battle sequences that were well planned out, choreographed and shot from good angles to make its 3D viewing worth it and pleasurable. You don’t get to see any unnecessary slow motions with fake blood gushes if that is your fancy. Hercules gets to show of not only in-human strength but also some crafty and cunning art of war. His band of merry men (plus a woman) did not fall short either on showing of their distinctive individual war skills.

The writers made use of good humor and wittiness to relax the whole seriousness of the story. Trust me; the humor was a huge plus. Careful use of sarcasm can never go wrong. Although you would have to be very attentive to catch some of these there are clearly quite enough scenes that would stir up a good laugh. Not to say this movie would pass for a comedy but… hey a little bit of humor doesn’t kill does it? If you are the type that appreciates good humor this movie is for you because it definitely packs that in good measure.

OK …so what I didn’t like about the movie aside the fact that it was short (trust me 98mins in my books is short), is what I would like to call a confusing factual blunder. Greek mythology mentions Zeus as the father of Heracles not Hercules. Hercules is actually from Roman mythology and the son of Jupiter. (Who cares? Well I do.)  Confusing indeed, but I don’t think it would matter to anyone who isn’t too concerned about getting mythological facts right as I am.

Whatever this movie lacks I must say it makes up for with all the action and humor. We get to see a human side more than a more conflicting wide known god-like persona of the Hercules character. Yes, this movie doesn’t play too much on the demi-god legends but leaves enough room to figure it out for your self. Bravery, heroism and honor are clearly depicted in this story.

Even though the movie builds up and progresses at a slow pace it doesn’t leave you lost and wondering what happened or is about to happen. As to if I enjoyed watching this movie, of course I did and its something I would want to watch again. My 98 minutes were not wasted at all.  And I would recommend this movie for any one who is interested in seeing the Hercules story being told from the realest point of view. For those not interested in watching this…. YOU HAVE NO IDEA WHAT YOU ARE GIVING UP.

Amphiaraus: No matter how far you go, man cannot escape his fate. Who are you? Are you a murderer? Are you a mercenary who turns his back on the innocent? We believe in you! We have faith in you! Remember the deeds you have performed, the labors you have overcome! Are you only the legend, or are you truth behind the legend? Now, tell me, WHO ARE YOU?

Hercules: I AM HERCULES!