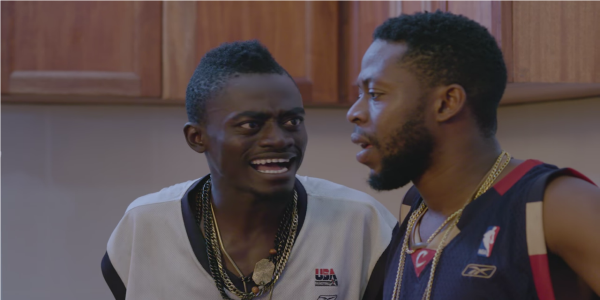 Action comedy is one of the toughest combinations of film genres to put together, but when it’s executed properly you are guaranteed a fulfilling film experience with the right amounts of humor and thrill. We don’t have to go to film school to know this for a fact.

The perfect action comedy is not only supposed to make you laugh but to have your Adrenalin levels pumped up a bit at some stages.  The challenge for a film maker attempting that mix would always be, finding the perfect balance between those two elements.  Finding the right script that perfectly compliments both genres.  Else you could either end up with a movie that is so hilarious that all the action elements don’t look serious enough or so much action your comedy elements appear just to be momentarily irrelevant.

John and John took a swipe at this blend of genres but barely managed to succeed. Apparently this happens to be a spin-off of a successful South African film titled Skeem (2011). Spin-offs are actually a thing in the film industry globally. Even Hollywood takes films from other countries across the world and remakes them to suit their primary market which is the American audience. But they make sure it’s clear to the audience that the story or theme of the film is based on another film.  They don’t try to pass it off as an original idea or script. Basically, it’s like writing a test with a cheat sheet and hoping no one would notice.

We actually went to see this film hoping that we could be wrong about John and John being similar to Skeem after seeing the trailer for the former. And we were more than just disappointed.

For the sake of this review and the growth of our film industry… we certainly have to compare these two films.

John and John, just like Skeem tells the story of two guys who after doing a big money deal are off to deliver the money to their boss.  Their car gets faulty along the way and since they are not able to find a mechanic they decide to spend the night at a resort they chanced on along the way. Upon reaching the resort they accidentally spill the cash out in the open with all the other guests at the resort looking on. That is where all their trouble starts. Greed turns all the guests at the resort into scheming thieves and these two guys would have to find ways to survive and make it through the night without losing the cash. All the guests have their reasons why they need to get the money for themselves and they would do anything within their means to have it, even if it includes backstabbing their friends or family they are with.

Throughout the film, you get to watch the characters trying to outsmart each other at every turn. And as you follow the million dollars as it keeps changing hands you are kept wondering who is going to have the money in the end.

John and John turned out to be “scene for scene” almost exactly like Skeem with only a few differences. Even almost all the characters were replicated with just a few changes in their backstories.

The cast lineup was okay for marketing reasons obviously. Everyone who goes to see this film has at least five favorites in it. It seems like almost everybody who is “somebody” in the film industry now was cast for this film. But performance wise, it felt like too many people competing for screen time. Most of who were trying too hard to be funny when they just didn’t need to be. With all the characters that the script required, the cast were left with not enough screen time to really show their worth.  In the end some of the actors ended up being totally under used.

Most of the main dialogue also was verbatim with only a few changes here and there to reflect the film’s intended Ghanaian setting. There is also the use of local dialects by some of the characters obviously for the sake of humor which was very necessary.  We noticed some of the actors didn’t appear comfortable enough with their lines. Maybe because we might already have heard those lines being said in Skeem and they sounded pretty much different coming from the actors we are very familiar with.

For us, it appears that about 85% of what we saw in John and John, we had already seen in the South African original version, Skeem. It’s almost as if the scenes from Skeem that were not replicated in John and John were either  not done because the logistics needed to  pull them off where not available or the director just didn’t want to risk attempting to recreate those scenes.

Production wise, the cinematography in this film was flawless as we would expect from Director Kofi Asamoah and his team. The visuals and audio were both pleasurable to our eyes and ears.  The only let down for us was the visual and sound effects.  The gunshot sounds were not realistic enough at all, just too basic and cheesy. And then there was that electric shock visual effects that we strongly feel could have been done better than what we saw in this film.

Regardless of how entertaining this film was, we at GhMoviefreak.com reserve the right to give this film a 6.7/10 rating after passing it through our foolproof rating scheme.  In our opinion, this film could have been much better considering all the talk about it.

Maybe, riding on the success of two very successful premieres over the past two years and not wanting to disappoint the fans,  KOFAS MEDIA felt they needed to do something bigger so they  ”borrowed” this script. We still feel that with as much 150,000USD they could have put together something much better and “ORIGINAL” than what we saw in John and John.

150,000USD (as compared to Skeem’s estimated production budget of 1,200,000USD) for a film might not be much on the global scale, but to our film industry it could arguably be the highest financing secured for a Ghanaian film in the past 10 years. Unless it was all PR, again, in our opinion we strongly feel that money could have been put to much better use.

Believe it or not, our film industry needs originality now more than ever. How do we make the rest of the world fall in love with our movies if all we can do is attempt replicating other people’s successes when we have our own stories we could tell. Although imitation is the highest form of flattery and sometimes the better poke at innovation, it is equally an enemy of creativity and a silent killer of brands. In this case, the brand is “GHANA FILM INDUSTRY”.

If we are going to applaud imitation, then we would have to be willing to celebrate creativity.

Nonetheless, if you are looking for a very enjoyable experience at the cinemas with family and friends you shouldn’t miss this film. It has enough humor to make you laugh. Even Kwadwo Nkansah speaking English is enough to leave you cracking with laughter.

If you saw last night’s premiere, do well to share with us what you also think about this film in the comments section below.

Watch below, the trailers for both “John and John” and “Skeem”.