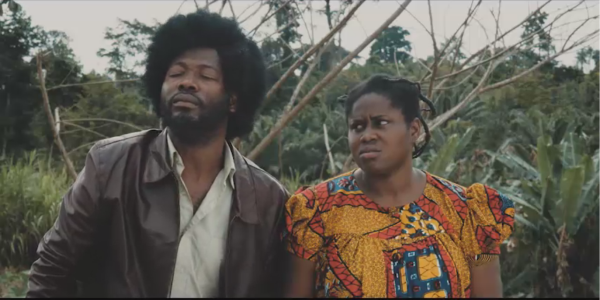 Rarely have we seen any films in recent times that provide the sometimes needed escape into the by gone days. We better appreciate where we are now when we are reminded of how far we have come. Sometimes normalcy turns into mediocrity and it only takes a little taste of something different to wake everyone else up.

Keteke is a period drama set in the 80s that tells the story of Boi (Adjetey Anang) and Atwei (Lydia Forson) travelling to birth their unborn child. After missing their train they are stranded in the middle of nowhere as they journey to the next station to try to catch the next train. With Atwei almost due for labor they must find a way to both be each other’s source of strength and wise counsel, or risk losing their unborn child.

The pairing of Adjetey Anang and Lydia Forson for the lead roles in this film was really an excellent choice. After watching this film, we can’t seem to think of any two people who could have better executed the roles of Boi and Atwei. The chemistry and coercion between these two significantly contributed to the overall quality of this film. If you have ever found a reason to doubt Lydia Forson’s acting prowess, then this is the movie you should see. She plays a role we could never have imagined her in and she nailed it flawlessly. We were also impressed with Joseph Otisman’s (who plays the role of the wizard’s aide) eloquence in the delivery of his lines.

Through the entire length of the movie we see Adjetey Anang and Lydia Forson in every scene but we never get tired of their presence on screen. The story progresses at a decent pace so it makes it easy to forget that we’ve been on the journey with them right from the start.  The dialogue from our two leads did well to give us more details into the backstory that led to them finding themselves chasing after trains.

This period drama sits comfortably in the comedy genre. Not to say that this film was overly humorous and would leave you rolling on the floor with laughter, but the intent to make you laugh is clear right from the start and it’s very pleasurable.  You are sure to find some humor even in some of the situations that found our lead characters being serious either to avert danger or to express their state of mind.

If not anything at all, Keteke has proven that you don’t need a long list of stars to make and sell a good film. A good film begins with the story it intends to tell and sometimes it’s best to let the story speak for itself. Finding the right cast with which to tell the story should only compliment the strength of the script and the entire purpose of the film.

The choice of locations and cinematography for this film perfectly suits the scripts intent. You are made to believe in totality that Boi and Atwei are completely far away from any settlements as they struggle to catch up with the next train.

We absolutely loved the soundtrack and sound scoring for this film.  The main soundtrack by Worlasi was a good mix of indigenous and contemporary styles that added a unique flavor to this film. It provided the elements of suspense, energy and intrigue that this story needed to have. Also, we acknowledge the tiny bits of visual effects used in this film. It wasn’t overdone or exaggerated in anyway yet, it’s evident how necessary they were to effectively tell certain parts of this story.

We were only disappointed that this film left us at the point that it did. We had clearly seen enough to want to see more.  The journey ended just when we were thinking we had reached midway into the film. Although it was aquite a dramatic climax we just hoped we had seen a bit more of the story especially on their return home.

GhMoviefreak.com rates this film a very well earned 8.2/10 rating because it delivered on exactly what it promises…. An epic journey.  This story besides being humorous packs a good measure of bravery, affection, affliction and resilience. All being character traits exhibited by our two lead characters.

Judging from the turnout at last night’s premiere and the smiles on the faces of the audience as they walked out of the cinema halls, it’s safe to conclude that you don’t always need controversial subjects to get people’s attention to come to the cinemas in their numbers to see a film. A good story is all it takes to get people’s attention. After all that’s the most important aspect of a good film and we all love a good story.

Kudos to Director Peter Sedufia and Oldfilm productions for being brave enough to try something different on their first feature film made for cinema.

Ghana needs more films like Keteke, what better way to start our 60th Independence Day anniversary than seeing a film that inspires hope in the potential of our film industry.  If you haven’t seen this film yet, don’t hesitate to go see it and be prepared to enjoy this epic journey.

Do well to also share with us what you think about this movie in the comments section below.