Movie Review: Maze Runner: The Scorch Trails 2015 *A Step Above The Maze* 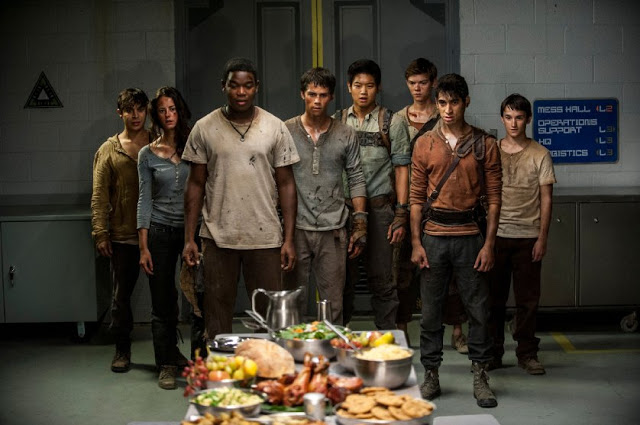 It’s been a while since I wrote any reviews and I must apologize. I know some of you guys have been wondering why. No reason would be good enough, just know this… GHMOVIE FREAK is here to stay. The new website is almost ready… keep your fingers crossed. Enjoy the read. Cheers!!

For anyone who has seen last years (exactly one year) release of The Maze Runner, this very title would not be new to you. The prequel ended with a cliff hanger that certainly had everyone expecting what the follow up title would deliver.

This follow up kicks off right after where the prequel ended…. As Thomas played by Dylan O’Brien (Most popular for his role in Teen Wolf) and the rest of the Gladers after escaping the maze now face other unexpected challenges as they search for resistance fighters to help fight WCKD.

Be prepared to find that this second installment does pack more action and thrill than the first. Not to over hype it, but yes…. It was more entertaining.  Very unexpected I must say, obviously because of the use of other scenes unlike the first, which had all of the story line restricted to the insides of the maze and the glades. In this movie you get to see gun fights, explosions, chases, daring escapes and zombies.

I personally wasn’t expecting zombies and from what I have read online the writers might have really changed the story line of the original books these titles are based off. (Bae, turned, looked at me and said,”Really, you brought me here to see Zombies? Really?”  lol).

I haven’t read any of the books but it seems those who have are not impressed with the turn this movie is taking. Nonetheless, I feel adding zombies made sense and kind of adds some depth and clarity to the entire plot of the first movie.

Apparently the kids where put in the maze to test their strengths to find a strain or enzymes in their genes that can be used to make a cure for a virus that has been plaguing the world. (Or so… lol).

If not anything, Scorch Trails really does make you appreciate the Maze runner movie some more… you begin to get that “Ok, this all makes sense now” feeling at some points in the movie. (That is, if you really are paying attention to it).

Like always I am impressed with good CGI, the directors didn’t go overboard with it. A perfect blend of good acting, great cinematography and flawless CGI can do a lot of good for even the poorest scripts. Be prepared to be impressed if you are a sucker for good visuals like I am.  I would love to see this movie again just to appreciate these good shots and ride the thrill that its actions scenes provided.

Another good thing about this movie was the acting. In my opinion the lead Dylan O’Brien is certainly a star to look out for.  There were some new additions to the lead roles for this movie. Unfortunately, the new additions or supporting lead role cast weren’t given that many lines so it’s almost difficult to keep up with the characters names and exactly why they were in those scenes. Nonetheless, the acting was on point. Better than some other reigning titles that also parade an equally young cast lineup.

As much as Scorch Trails adds some depth to the plot of The Maze runner, it’s still likely to leave you confused and wondering what the entire movie is about. There are still many unanswered questions which I hope would be answered in the next installment. (Let’s pray it’s the last installment and not another Part 1 & 2 thing).  Again this one ended with cliffhanger that makes you thirst already for the next movie.  I already can’t wait for this time next year. (Its projected release date).

This might not be a perfect movie in terms of understanding and big cast names, but its 2hrs 11mins run-time is worth it. You are guaranteed of excitement, thrill, good entertainment and an equally fulfilling climax.  Comparing this to the prequel, The Maze Runner is like an innocent new born baby and Scorch Trails is and blooming daring adolescent.  Let’s wait patiently to see how its adult life plays out

That is why I would rate this…( a well-deserved)…. 7/10. I would strongly recommend every movie lover to go see this tile.

The Maze was really just the beginning.