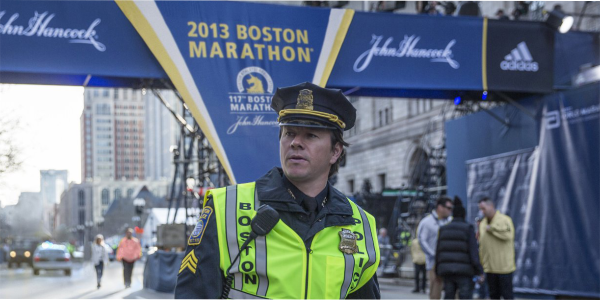 You might be familiar with the April 2013 Boston Marathon bombings or not, even on this side of the world. It is surprising and yet still saddening how it sometimes takes an unfortunate tragedy to unite us humans and bring us from all over the globe together as one people.

Patriots Day is an on screen account of the events leading up to the 2013 Boston Marathon bombing and the aftermath, which includes the manhunt to find the two terrorists responsible for it.

This film does an excellent job at leading the viewer into the lives of everyday, average Americans who were caught in this unfortunate unexpected incident. It starts off like just a normal day with no warnings or anyone expecting something this tragic to happen. And then it shows us how people’s lives were affected and changed in the next 100 hours preceding the bombing.

It’s a bit surprising that this movie has been made already, considering that it has been just a little over 3  years exactly since the actual incident and still quite fresh in the minds of people.

Director Peter Berg seems to be creating a niche for himself with true life narratives. He is credited with directing Lone Survivor (2013) and Deepwater Horizon (2016) which both star Mark Wahlberg (who also plays a lead role in this film) as well as Kingdom (2007). It’s obvious he is good at films based on true events judging from how much detail is captured in these films.

The screenplay makes use of accounts from several persons involved in the tragedy other than just giving one person’s account or perspective of what happened.  The cinematography blends in well with all the actual CCTV, surveillance footage and raw news footage from the actual incident.  A lot of detail is captured in this film, showing extensively both the physical and emotional damages the tragedy had effected. So much that it is difficult to ignore the thrill of the chase of trying to track down the perpetrators.

Although Mark Wahlberg’s presence and even the character he plays in this film didn’t seem needed at all, the screenplay does an “OK” job giving that character some relevance in the entire story.  Although a bit exaggerated, he does add a tiny bit to the drama and thrill that the film needed to have. This film could have still been made without him especially because he has already been seen in two other true life narratives. All the other casts performances were solid enough to keep the audience engaged.  Their collective delivery encompasses emotional elements like pain, anguish, despair, hatred and bravery which were decently executed.

As much as this film isn’t about a laughable matter some of the dialogue forces an occasional laugh. Especially in some of the scenes that had Mark Wahlberg’s character playing a typical over zealous yet sarcastic Mark Wahlberg type character.  Nonetheless it’s nothing enough to take anything away from the clarity of this film’s emotionally intense narrative.

GhMoviefreak.com gives this film a decent 8/10 rating as its one of those films you might not be excited about seeing at first but would surely fall in love with and would want to see all over again after it ends.

The climax of this film gives you a better sense of appreciation for why this film was made. Not to only tell the story of what happened, or to serve as befitting tribute to those affected but to also remind us that together as humans we are stronger than any challenge we face.

We don’t have to wait till tragedy strikes before we stand together as one people, it’s our designed nature as humans to be compassionate and united.

If Ghanaian film makers could take a cue from this film and turn some of our tragic experiences into beautiful on screen dramas, we would go a long way towards actually becoming that strong formidable force we are perceived to be.

Do well to let us know what you also think about this film by leaving a comment in the comments section below.