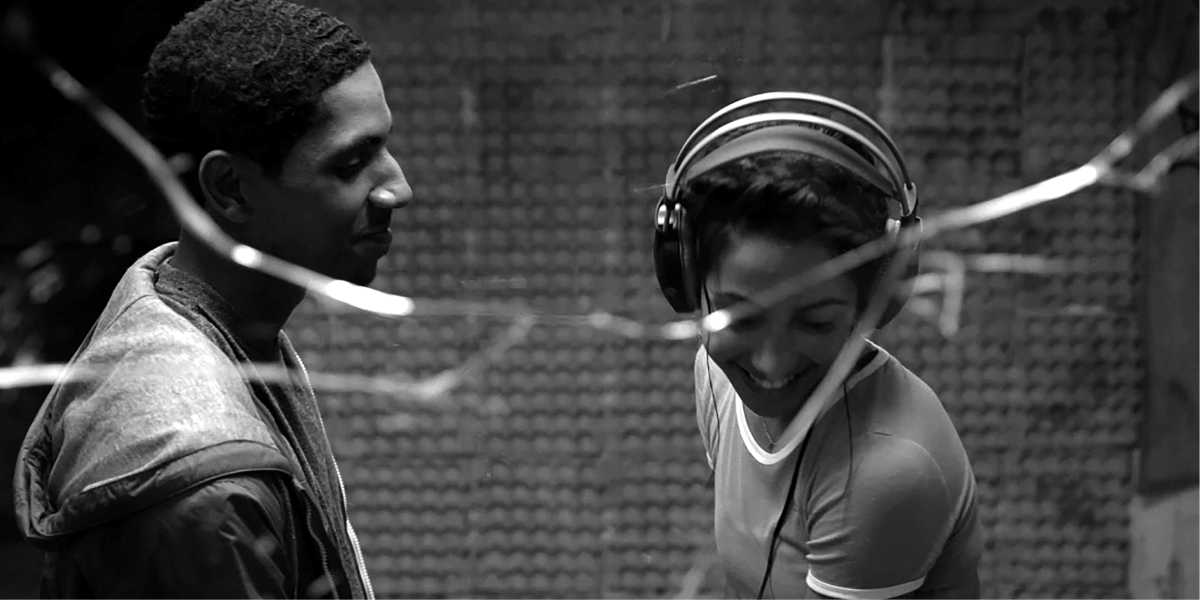 ‘Wheels‘ written and directed by Paul Starkman passes for a true ode to the city of New York. Even as a black and white film, it captures the sights and sounds that appear to give a true representation of the people of the city and their diverse ways of life.

It has the makings of a gritty noir-style crime thriller with Brooklyn as a backdrop but it is truly a coming of age story. The story focuses on Max (played by Arnstar) a young budding DJ with big dreams. He must find himself and what he wants in life whilst navigating through complicated relationships with his grandmother and his brother who just returned from a stint in prison.

When he is not Djing he’s working at a local grocery store or taking care of his ailing grandmother. But he occasionally has to deal with some associates of his brother who add up to his issues. Thorugh it all Max is driven by his ambition to be a DJ even when life keeps throwing him a curveball or two.

The strain on the relationship between Max and his brother Terry (Joshua Boone) is heavily felt each time they are both on screen. You can feel the tension which is sometimes furthered amped up with some very emotional dialogue exchange.

Max is conflicted about pursuing his dreams or taking a shortcut which would mean he getting involved with so unsavoury characters from the neighbourhood who could leave him down a path of crime. That appears to be his biggest challenge. How long can one hold on to dreams when the universe seems to be against them?

Arnstar is perfect for the role. He comes off with some boyish innocence and naivety that brings some genuineness to Max’s struggles. He proves himself a solid pick for the role by bringing some authenticity to the character. His onscreen chemistry with Shyrley Rodriguez who plays Liza (a dance teacher) provides a lovely slice of young romance and a different level of emotion that compliments the dish being served with the film.

Rodriguez herself delivers a more than a decent portrayal of the character Liza. Just like Max, she too is driven by her talent and her ambition to be successful at something she loves doing. They are easily drawn to each other and provide some solace to each other’s struggles. Although we don’t get to see their romance go any further than a couple of casual dates you can’t help but be convinced that the pair were made for each other.

The film is heavy on the music, after all, it is about a struggling disc jokey. The scoring is perfect making use of varied genres of music that provide a good mix of old school and new school vibes that are sure to have you nodding or thumping your feet at some points in the film. No matter how heavy the score gets, none of the dialogue is drowned or subdued.

Starkman also uses a very crafty way to capture the violence in this film. It’s not harsh or in your face brutal but modestly communicates harm being done to someone. You get the idea and it saves you the trouble if you are not comfortable watching violent scenes.

The film’s message however is realistic and easy to follow and understand. Your destiny lies in your own hands and you must fight hard and stay focused to see your dreams come through. I would score ‘Wheels‘ 7/10 for its ability to hold the viewer captive whilst delivering a decently passed drama that conveys a good message.

‘Wheels‘ is one of those films that you are not sure of seeing at first but by the end, you are left satisfied. For an indie and a feature film directorial debut it is well shot and put together and certainly something I would recommend for anyone looking for something other than what’s become regular.

You can watch Wheels here.