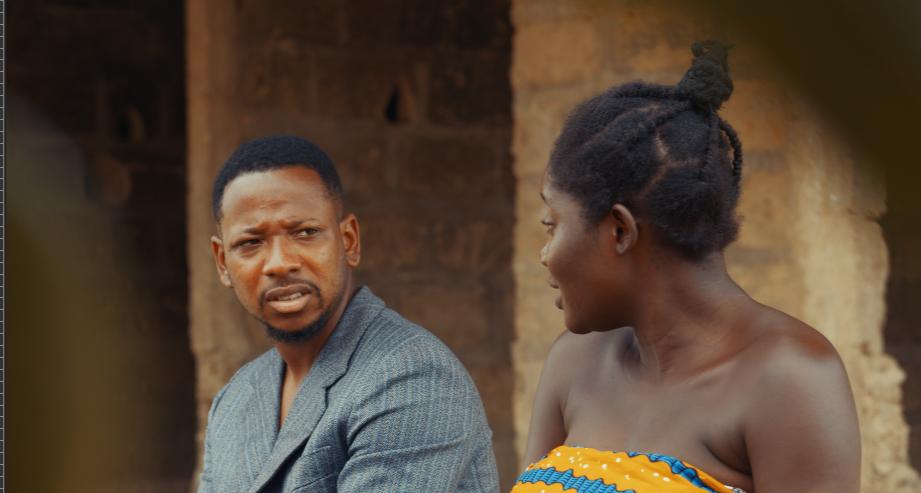 Culture and tradition can be simple and yet complex in so many ways. But it must not be forsaken even if manages to make the simplest of situations seem more than a tad serious and complicated.

‘Road to My Father’s House’ tells a story about a somewhat simple situation that is further deepened by the complexities of culture and its hold on us.

As proof of Ayele’s dignity as a cultured woman from the Ga tribe of Ghana, she is recklessly determined in the ninth month of her pregnancy to have her boyfriend, Dela, a man from the Ewe tribe of Ghana whom she lives with pay her bride price before she births their child as custom demands. Dela, who conversely is confused about whether or not to make Ayele his wife and has no money for the excessive items that go into the bride price for women from the Ga tribe is compelled to find a way to send her back to her father’s compound.

At the centre of this film are the characters Ayele and Dela. The on-screen chemistry between the two speaks a lot about the quality of writing, direction and even the talents that went into the making of this film. For a greater part of the runtime, the story focuses just on them both.  As the dialogue details almost all that you need to know about their individual characters, backstories and the central plot itself.

Bless Fortune in Road to My Father’s Compound 2022

Bless Fortune provides the perfect canvas for the depiction of Ayele. She is feisty and mean when she has to be, as you would aspect from a typical Ga woman who won’t hesitate to put anyone in their place when she feels slighted. But she also shows her vulnerabilities when needed. The range of emotions she displays feel genuine to the character she is tasked with.  Even through her hostility and abrasiveness you can tell that she is genuinely in love with Dela. She also has fear and respect for her father and would do anything to make things right by him.

Aaron Adatsi is also spot on in his execution and delivery of the character Dela. For a greater part of the film wears the demeanor of a broken distraught man who is further burdened by demands of a woman who he thought he had found love and happiness in. There are moments that he openly declares that he no longer has no love for Ayele and the child she is yet to deliver. But you can only blame that on frustration he has to deal with whilst struggling to cater for himself and a pregnant woman on the meager earnings of a mechanic’s apprentice. Clearly, he has no one to turn to for help and that only can weigh heavy on a man’s mind and hurt. The last thing he needs is the patience to deal with a nagging pregnant woman and her demands for marriage.

Dela casts a shadow of many younger men who are far away from home and are might have found themselves in similar situations out of love or just the desire for sexual gratification. But unlike many, Dela does the right thing sticking through it with Ayele. He accepts responsibility and is making an effort regardless.

The young couple’s love is tested not just by the pregnancy but by tradition and its expectations of young adults who are willing to settle down with each other. But does love matter more than tradition? Or nothing overreaches the importance of tradition?

Aaron Adatsi in Road to My Father’s Compound 2022

The film is written and directed by Benedict Yeboah. He also plays the role of Nii, Dela’s friend. The character he plays provides some respite from all the intensity between Dela and Ayele. When Dela decides to go to him for help for some money he gets to know about Ayele and her pregnancy for the first time. He is as shocked as he equaly is concerned about the situation, He two being a Ga seems to understand Ayele situation much better and proceeds reveal more details on the importance as well as the complexities of the marriage rites that Dela must perform.

Also staring in this film is ace actress Edinam Atatsi, who plays the role of Baafra a midwife who offers help with Ayele’s pregnancy. It is delight to see a season actress supporting the work of such a young director with her time and talent.

You can’t also overlook how much the sound score contributes to this film. At every point where necessary, the dialogue and the visuals on screen are cradled by a soothing sound score that perfectly communicates the right tone for the scene. It is a perfect blend of original or familiar music that also reflects the films domestic setting and certain cultural influences of the tribes either Ayele or Dela represents. It is simply beautiful and works very well for this film. Even when the characters are supposed to be in some pain or hurt, the sound score is right there through it all.

As a debut feature film from a young filmmaker, Road to My Father’s Compound is a strong statement. It picks a subject that is youth centered and tackles it with so much honesty. it dares to delve into the complexities of tradition especially on the subject of inter-tribal marriages.

Hopefully, the young filmmaker attempts to tackle more of such issues through film in his subsequent undertakings.

‘Road to My Father’s House’ is certainly a must see for everyone. It details a matter of young love and that dares to challenge the complexities of tradition. It is honest and beautifully made and succeeds at telling a story that packaged to live you both entertained and informed. Roi

Do not hesitate to see it.