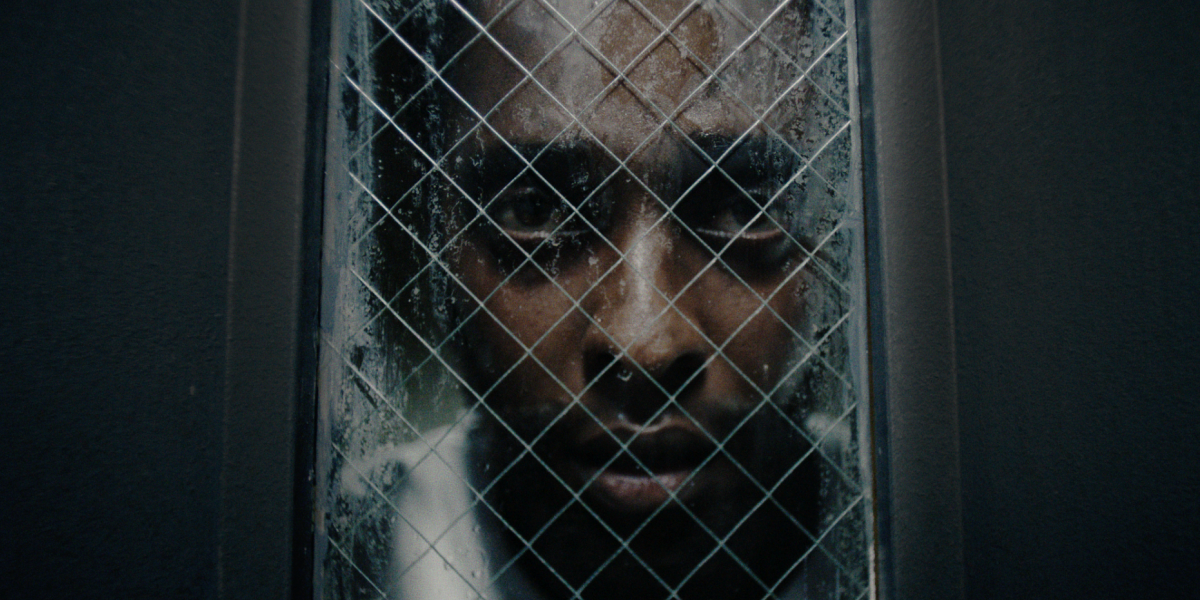 ‘Caged‘ is an intense psychological drama about Harlow (Edi Gathegi) an African American psychiatrist who is convicted for the murder of his wife. He insists that he is innocent and gets placed in solitary confinement whiles he struggles to file for an appeal. He gets pushed to his wit’s end by an abusive female guard and haunted by his dead wife, causing him to question his own innocence and sanity.

Most of the story is told within the four walls of Harlow‘s cell. We are taken along with him on his torment and the psychological warfare he has to deal with within those walls.

We see him slip in and out of reality as he constantly mentally replays events from that fateful day. Aided by the crafty screenplay, flashbacks are used to give viewers a look at how things went from Harlow‘s perspective. And then we are left to decide if he is innocent or guilty of the murder he has been sentenced for.

The entire ordeal is not easy for Harlow as he begins to question his memories and doubts the events that he recalls. He is also being hunted by images of his dead wife.

Clearly, they were a couple with some issues they were trying to resolve. The dialogue from those flashbacks paints the picture of Dr Harlow Reid being an insecure egoistic man married to Amber (played by Angela Sarafyan) a defiant yet the cherished daughter of a wealthy controlling father.

Gathegi‘s performance holds the film together. He is a powerful leader in this one and succeeds at carrying every viewer through to the end. He displays a vast range of emotions. From, anger to excitement as well as confusion and surprise, he handles and delivers well on all these. There are moments that he’s hopeful and then moments that he shows complete despair and they are all believable and an accurate depiction of exactly where his head would be in any of the situations he finds himself in. As an actor, this could possibly be one of the shining moments for Edi Gathegi’s career, even if its missed by many, possibly someday when he’s caught a big break, this film and his performance in it might come up in the conversations.

Starring opposite him is Melora Hardin who plays the mean sadistic prison warden Officer Sacks who is bent on making his time at the prison even more unbearable. She comes off as a racist as there is no real motivation for her disdain towards Harlow. She tortures him psychologically and physically at any least chance she gets. Melora‘s performance is also stellar in this film. You can help but despise her actions and wish karma deals with her. In the film, she is the villain that no one actually would root for

The cinematography and camera angles are mostly tight and close-ups especially for the scenes inside Harlow‘s cell. But they capture enough to give a detailed experience of how claustrophobic being in a solitary confinement cell can get.

Harlow‘s ordeal is horrific and paints a clear picture of what could be the state of many prisoners being held in solitary confinement. He feels all alone with no one on his side or anyone to come to his aid.

I would rate this film 6/10. It is emotional, tensed and heart-wrenching. There is something about watching a man getting pushed to his breaking point that makes you want to make better life choices.

What also works for this film is how the viewers are left to figure out and decide if indeed he is innocent or guilty of murder. Even when Harlow starts to contemplate suicide, you are not sure immediately if he’s doing so out of guilt or just despair. This debate alone is enough to keep you through to the very end of the film.

‘CAGED‘ is one of those films that you might not be immediately excited to see and it requires that you have some patience to sit through it to appreciate it. However, its underlying themes of racism, injustice, regret and pain are strong and very well delivered on by the overall performances.