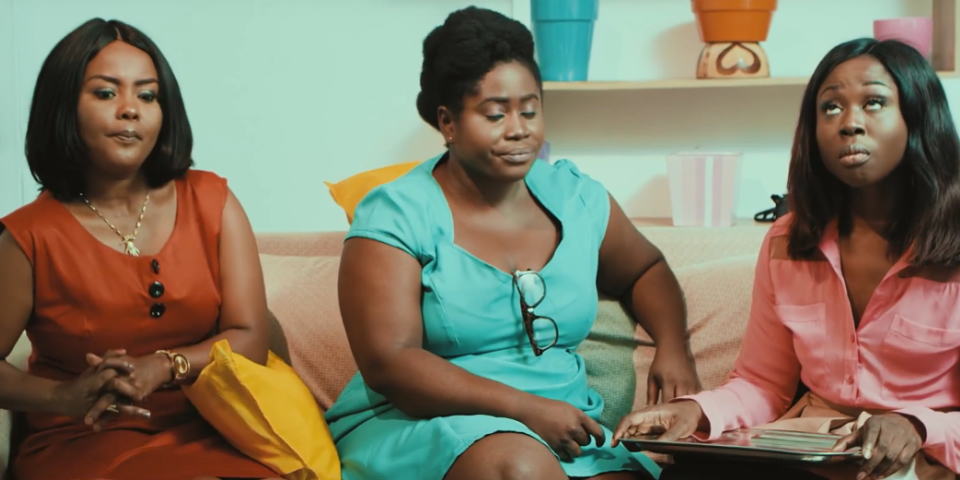 After exactly a year we finally get to see the second feature film from Peter Sedufia. His last film, a period piece, Ketete, was received with critical acclaim and so much talk that had  everyone waiting to see what next, he had in store for us film lovers. For us at GhMoviefreak.com the anxiety got even worse after the title of the film was first announced. We just couldn’t wait to see what the SideChic Gang was going to be about.

In SideChic Gang, three ladies find out they can make fortunes from exposing cheating husbands and boyfriends after making tons of cash unexpectedly from reporting a cheating husband to the wife. They quit their ushering job to set up “Sidechic Gang” – an agency solely dedicated to clamping down the side chick menace. Their very fruitful run at this begins to face opposition from the many aggrieved men who they had exposed after they are hired by a very rich man who suspects his fiancée to be cheating on him.

On the surface you can easily tell this story was written by a woman, right? Rachel Adikwu’s story is brilliant and the screenplay does justice to it. If the SideChic Gang really gets set up you can imagine how many women would queue up for hours each day from the crack of dawn, to enlist their services, just as seen in this film.

Nana Ama McBrown, Lydia Forson and Sika Osei are simply flawless in this film. The onscreen chemistry and cohesion between the three lead stars is to die for. All through the film they complement each other’s performance and there is never a scene where any outshines the others. The character development and their delivery make it easy for you to pick up on each character’s strength and weaknesses and its impressive how all these details about the characters goes on to complete the bigger picture in this film.

The vast variety of cast and characters in this film can’t be overlooked. Even from the extras (mostly those who played clients to the SideChic Gang), you get to see an array of decent acting performances that added more to the depth of this film, performance wise. You can’t take anything away from the elements of humor in this film either. It sits well in the comedy genre and you are sure to laugh too many times. Not as a result of senseless over dramatized comedic acts or shenanigans, but as a result of pure wit and classy sarcasm, and three lead ladies give a good dose of that.

The film’s story appears to only expose men and their usual excuses/defense for cheating when caught. But by the end it delivers a strong message that can’t be ignored at all. Nobody is perfect and sometimes a situation that seems too distant could be closer to us than we think and how we react to such situations seem to define who we really are.

The cinematography uses well captured steady shots and shaky camera handling sparingly, to set a tone of uneasiness in some of the scenes. Sometimes the camera says the things the characters aren’t and, in this film, you get to see that a lot. Details are everything in film and this new piece from OldFilm Productions packs that in good measure.

The editing and color grading used in this film gives it a decent cinematic aesthetic feel. But we felt a bit of disconnect in the early minutes of the film considering that all the artworks for the film we had seen had very strong and solid color shades.  The brown toned color grading used in to the final cut we got see in the cinemas presented a huge contrast from what we had seen in all the artworks and it took us a while for that to settle in.

If there was anything that was really missing it this film it would be its own distinct unique sound score like what we got to hear from Worlasi in Peter’s last film. Maybe there was and we missed it. Nonetheless, the film does boast of some very impressive choice of soundtracks and mood music that complements the scenes in this film.

This film scores an impressive 8/10 on our rating scale.  In comparison Keteke (read our review on that here), remains a much stronger film for us than SideChic Gang. The first cut is the deepest like they say and Keteke is that first cut from Peter Sedufia, feature film wise. But the latter equally delivers on being an enjoyable experience at the cinemas with family and friends.

In our books Peter Sedufia is two-for-two so far. And we are eager to see how far he’s able to go with the SideChic Gang as well.

In case you missed out on last night’s red-carpet premiere for the SideChic Gang, make sure you go see the special holiday screening on the 6th of March at 7pm and 9pm. It’s definitely something worth the time and money, we can guarantee that for sure.

If you have already seen it do well to share with us your thoughts on it in the comments section below.