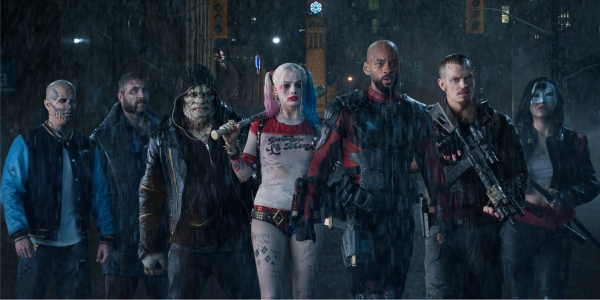 For most of us on this side of the world Suicide Squad is fairly somewhat new to us, although we might have seen the animations or read some of the comics. But certainly for a greater majority, this collection of bad guys out to do some good are just another bunch of superheroes we would love to see regardless of what anyone else my say or think.

For anyone who has no idea what the Suicide Squad is, they are simply a collection of weird imprisoned supper villains who are recruited by a secret government agency (In the DC universe) to help save the world in the wake of the demise of Superman.

Yes this film takes place after the events of Batman V Superman: Dawn of Justice (See our Review for that here). With Superman dead the Suicide Squad was put together to be a defense approach should in case the world encounters another Superman who wasn’t in the favor of doing good and saving human life.

This movie is anything but a flop if you should look at it from an angle of someone who just wants to go to the cinema and enjoy a great movie about a bunch of weird good, bad guys. But you are sure to somewhat scrutinize it a bit more if you are familiar with the comic books. If you think Batman V Superman: Dawn of Justice was an awesome movie for you, this is would be “awesomer” for a lack of a better word.

With all the talk that preceded its production till its worldwide release last night it really shows it is so much of a big deal and you can’t say you love movies and and yet chose to be oblivious wanting to know how good this movie really is.

The choice of cast that features, Will Smith, Margot Robbie, Jared Leto, Viola Davis, Joel Kinnaman, Jai Courtney was a very good combination of individual characteristics. You would just love seeing Jared Leto’s version of the popular Batman nemesis, The Joker. Margot Robbie certainly left her mark as the first person to play the Harley Quinn character which won’t be forgotten ever. And as for Will Smith as Deadshot, there is no doubt that anyone who sees this movie would not be excited about seeing a standalone movie about the origins of Deadshot. (We pray that happens.)

DC Comics is certainly stepping up to match the dominance the Marvel Universe has been enjoying all this while and it’s exciting to see that through the efforts being put into their recent releases. We applaud Director David Ayer for his work on this film. Marvel has stiff competition now.

Suicide squad is littered with enough humor and wittiness that contradicts the well-known dark, gritty and violent feel of DC Comics. Not to say that this ruins the movie but on the contrary the humor is all you need to relate and follow this movie. The action sequences were a bit confusing and over dramatized at times but the laughs were worth it. Especially, Harley Quinn’s sheer craziness.

The story line fuses action,craziness and mythical elements into one entertaining cocktail that you just have to love. Surprisingly the final cut for this movie left out some of the scenes that caught our attention most in the earlier trailers that were released. Whatever the reasons were for doing that, it just felt a bit out of place to have seen those snippets of those scenes in a trailer and expecting to see them in the full length movie only to be disappointed.

We loved how the entire film had a very recent and modern day feel to it, especially in the choice of clothing, slang and undeniable hip-hop influenced soundtrack/score.

To make up for a better understanding of the various characters that make up the Suicide Squad, the story line infused a lot of flashbacks which became a bit distracting for us.

As much we enjoyed this movie and very much sure we would love to see this over and over again, we would rate this movie 7.8/10 only just so we can get more out the DC comics in their next installment.

If you haven’t seen this movie yet… we would advise you to stop wasting time waiting for some crappy cam version to leak online and get yourself to the Global Cinemas on the Kasoa – Winneba Highway and enjoy this action packed movie in the company of some of your great friends and it would certainly be worth the entire experience. You are guaranteed of a very enjoyable viewing experience.

Do well to leave you comments, feedback and opinions about this movie in the comments section below.