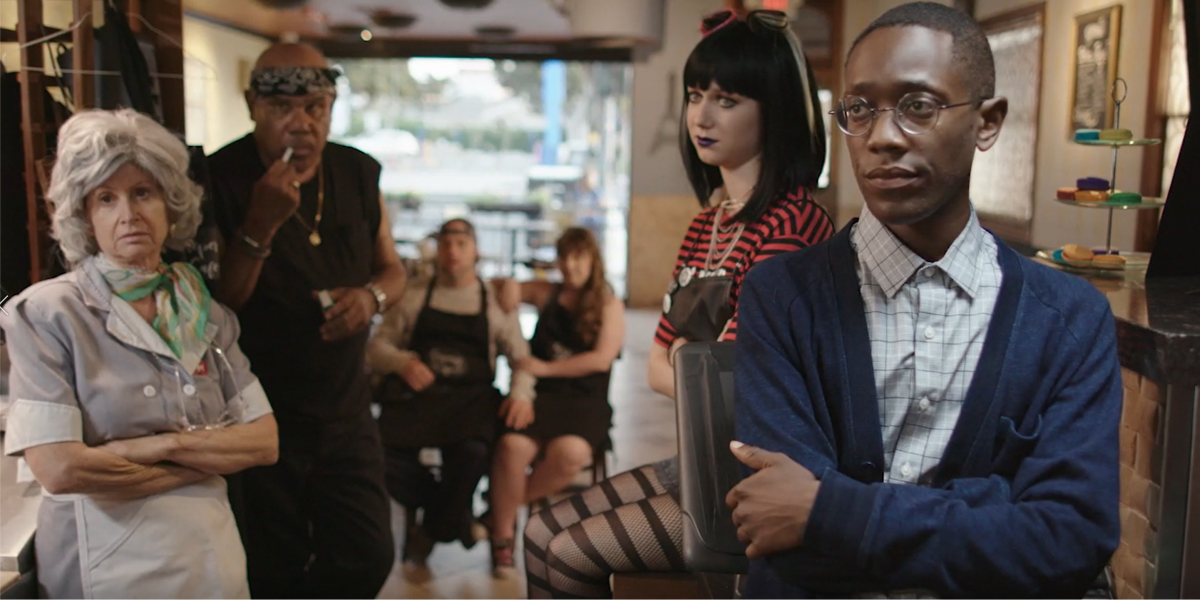 It is always a different feeling going into a movie without having any high expectations for it and getting surprised by how it turns out. This Linda Palmer directed comedy starts of slow and then surprises you with a feel-good story that entertains with very some endearing characters.

Turnover tells the story of Peter, the owner of a French cuisine café that is popular in the community. A bad spell of stress leads him to take a two-week vacation. He entrusts the business and its operations into the hands of Henry (Riker Lynch) his manager. Who is motivated by the thought of being the one to run the next site of the café. Henry soon finds out that Peter’s ex-wife has her own plans of running any other franchise by herself and their little son.

Henry out of spite decides to quit his job but not before he has hired a bunch of misfits to run the place. Hoping that they would run the play into the ground even after Peter has returned.

Each of the characters feel likes a real live-action version of characters you would see in an animation …that is if this film was an animation. They are each interesting and lively in unique ways. With each of them having an interesting backstory, you are given so much to follow without being confused or distracted from the central story being told.

The main attention grabber in this film is the to interviews that Henry holds to find literally the worst possible staff for the cafe. At least for me that is when the film starts to show some promise of being entertaining. The interviews are hilarious as each of the ‘misfits’ are introduced.

There is Gladys (Julia Silverman) a much older woman who lands the head waitress job. Pepper (Isabella Blake-Thomas), a rebellious Gothic teenager with a bit of an attitude problem who also gets hired as a server. Charlie (Blair Williamson) an eager lad with down syndrome and his girlfriend Gina (Jamie Brewer) also land jobs in the diner. Miguel (Carlos Carrasco), a tattooed very intimidating biker on parole surprisingly lands the head chef position. And then finally, there is William (Adwin Brown), a shy African-American applicant with no management experience gets burdened with the management position.

The most recognizable if not the most known cast member in this film is Paul Guilfoyle. He plays, Peter, the owner of the dinner. Reeling from the effects of a divorce and failing health, it’s as though the most important things left in his life are the café and his son. He appears dedicated to keeping his business running and establishing a franchise that his son can take over someday.

Paul delivers flawlessly on this role without outshining the other actors in this film. They are each able to own the characters they played making it easy to love them. Their backstories are so interesting that you get drawn to each of them despite them being tagged as misfits.

Peter over time, learns to appreciate the help he is getting from these people he doubted and counted out when he first arrived from his vacation. And that begins to change his outlook on life. We get to find out that you can find a family amongst the most unlikely group of persons.

What this film also does is to throw some light on persons with special needs and how they too are capable of changing the lives of people they encounter positively. The characters, Gina and Charlie for instance show that person’s with down syndrome can live normal lives working, finding love and making a family if they are well supported.

I would score ‘Turnover’ 6/10. It is something the entire family can watch together. But it helps not have very high expectations for it. It delivers a decent comedy that is a slow burner at first but satisfying emotional rollercoaster by the time it ends.

In the end, Linda Palmer uses loveable characters to tell a simple story that proofs that we are all capable of being heroes in our own small ways just by showing love to the people around us.

Turnover is really a story about accepting people for who they are and not trying to mould them into someone else.