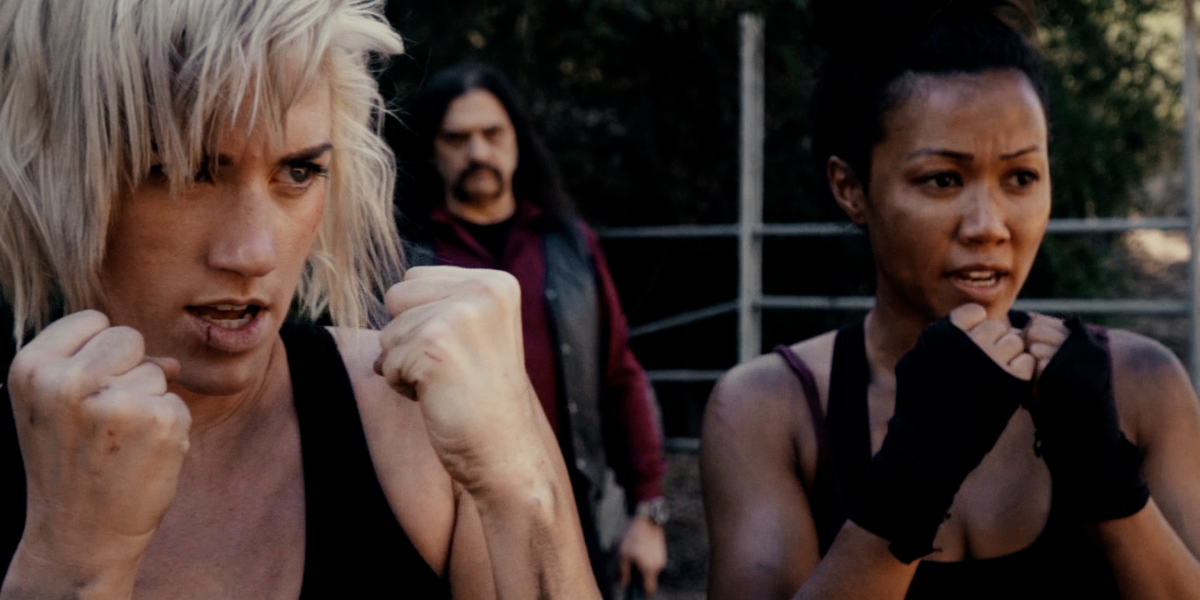 In Unchained, an idealistic woman is kidnapped and forced to compete in an underground fight ring. Every night is a fight for her life as she plans to overthrow her captors and save the lives of many others doomed to the same endless cycle.

Aella is struggling to find a job to no avail and is willing to do anything to make a living. She hears of a film audition and goes to give it a shot. But she ends up as a hostage of an underground fight club for women. Trapped with other women she must fight to save herself and her fellow captors.

Mair Mulroney stars as Aella, the character at the centre of this film. She is absolutely pleasing to look at even with a couple of bruises and a split lip. She manages to remain fierce yet pleasing to look at throughout this film. For her fight choreography, she delivers decently and carries the film’s underdog fighting for survival theme well through to the end. If anything at all, she saves this film with her performance at least.

The acting in this film isn’t the best you would see. Most of the delivery is not impressive and amateurish with no emotions. The actors generally make it very difficult to overlook the quality of acting.

There are a couple of Pro-wrestling stars in the film but we never get to see any of them in a fight surprisingly. Perhaps that could have added some excitement to the film.

The fight sequences are decently shot and edited serving you the action that is supposed to hold this film together. But it is still not enough to save this film.

One of the selling points of this film is Eric Roberts who you would see clearly in the trailer. But disappointingly, he has just a small almost insignificant role in this film We only get to see cuts of him, reading a book to a little girl. We assume that the little girl is Aella and Eric Roberts plays her father. The flashbacks seem to depict memories of her childhood with her father and how she is motivated or driven by his words.

The overall look and feel of it is that of a guerilla film. But it has some strokes of genius in the art direction department proving that the makers knew exactly what they set out to achieve and what they had at their disposal to make it happen. The art direction complements the shots giving the film a good cinematic feel that makes it somewhat easy to sit through.

Judging from this, I am confident that director and co-writer Raphello does have some potential and with the right budget and quality actors he might be able to do something much more impressive.

The idea of a struggling woman getting forced into a fight club is a great idea but sadly this film doesn’t do enough justice to it. I would score it 5 /10. Unchained starts with promise but it is tanked by poor acting and overall poor execution. However, it is still worth the watch.

Unchained is available on digital from Leomark Studios starting 2nd July. If you are down for some girl on girl fight action this is something you should see.

Movie Review: ‘This Is Not a War Story’ – A genuine ode to war heroes and their struggles.