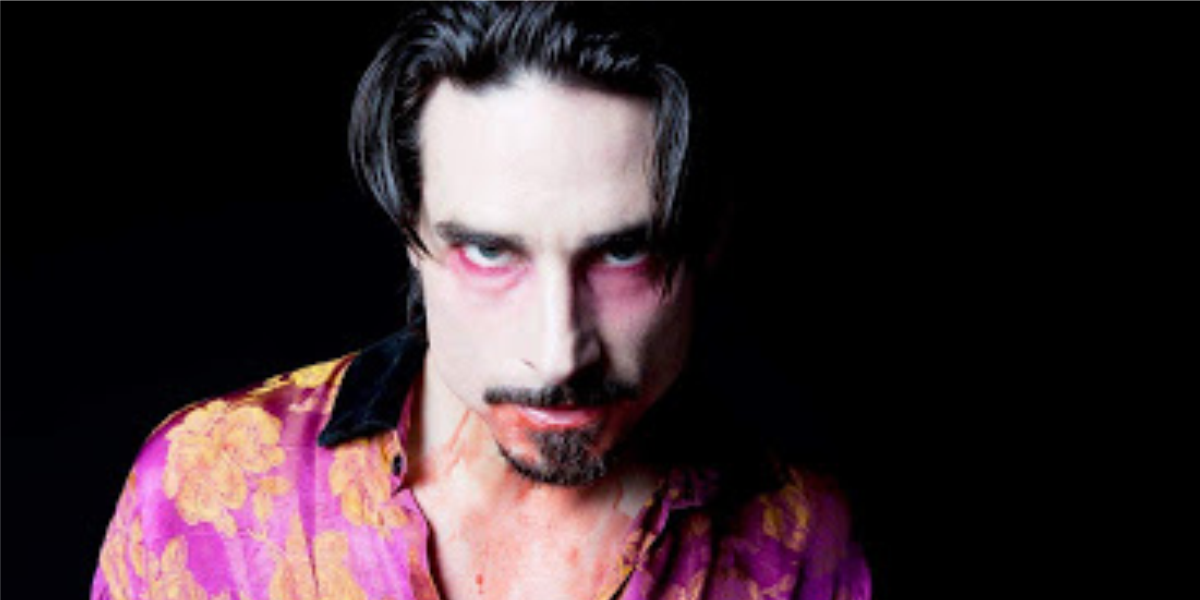 Vampire Burt’s Serenade is a comedic horror musical about Burt (Kevin Scott Richardson), a cocky homicidal vampire who’s detested by everyone else around. He bites and turns his friend Todd (Brandon Heitkamp) who believes he’s bisexual and still trying to find himself. Tod tries his best to fight the urge to feed on others blood until he encounters Connie (Diva Zappa) his girlfriend. He turns her and then she also gets bitten by some zombies and turns into some form of hybrid.

Todd follows Burt as he makes his way to CandyLand, an art space for the wealthy in the community where he plans to indulge in more debauchery. Meanwhile, there is group of strippers who are trying to raise 10,000 dollars to pay a vampire hunter (Kenneth Hughes) to help get rid of Burt after his recent massacre.

A lot of the story is told with genre bridging music. From rock to pop and some hip-hop infused rhythms that are sure to leave you entertained.  Surprisingly, he intermittent switch from linear storytelling to music and then back is seamless in this film.

Kevin Scott Richardson a member of the Backstreet Boys is the main star in this film. He delivers very well in that character selling us the idea of Burt. He lives a wild life… literally indulging in all forms of debauchery knowing very well that he is untouchable as a vampire. He is corky, reckless and clearly not afraid of anyone or anything. Even with all the adversity he brought on himself he still doesn’t seem unfazed by all the dangers around him. And when it’s time to sing, he equally nails it. Further accentuating  why the idea of making this film a musical is not only different but brilliant.

The movie turns out to be more comic than horror, maybe except for people who find blood uncomfortable. Not that it is too bloody… but what do you expect when it’s a movie about vampires?

The screenplay is not very clear from the start and requires a lot attention and patience to figure out exactly what it is about and where it possibly could be heading to. It is clearly very offbeat, unconventional, unorthodox and nothing like anything I have seen before. Most of the myths about vampires are not clearly portrayed in this film. We don’t see Burt or any of the people he turns exhibiting any superhuman strength or any special skills like we see in most films about vampires. Fortunately, the entire film is made up of night scenes and internal shots so the widely known myth of vampires being sensitive to sun light is not questioned.

But it is difficult to tell if all the events captured in the film happens in one night. But the buildup to the climax is slow and steady. Even as it nears the climax some new characters are thrown in the fray and you are left wondering where they had been all this while and why they were introduced that late when they could have clearly added some more depth to the screenplay. Or, atleast provided some interesting backstories.

Some of the actors seemed a bit out of place and amateurish… making it a bit excruciating to endure but it’s something to expect from most indie movies with small budgets. Nonetheless there are a few moments of acting brilliance that makes you appreciate the talents and the work then went to into making this film. Especially when the characters transition into singing. There are some scenes that were made better by the songs and others that appeared to drag on more than necessary courtesy of the songs used in those scenes.

What’s most funny is how they are able to keep it together singing some of those raunchy lyrics. The blooper reel for this film must be very hilarious and it is absolutely something I would love to see. The film in it self is cheesy and easy going, the characters let loose and go wild clearly having fun with the the characters they are tasked to play.

The visual effects are basic and nothing fancy at all but they work for this film … maybe except for the flames emitting from the mouths of the vampires after they feed. Besides it not being something we have seen from any vampire movie it just felt very off and wasn’t quite explained in anyway throughout the film.

Vampire Burt’s Serenade is interesting in a weird way. Although it doesn’t succeed at actually serenading you in anyway … it does enough to keep you occupied for its almost 80 minutes runtime. I would score it 5/10. It’s biggest strength for me is the creativity behind the idea of singing vampires. It is not something that would have mass appeal, but would certainly be a guilty pleasure for a select few who might be into all forms of musical cinema.

Although it is far from perfect and a bit excruciating to sit through you are eager to see where this goes and how it ends for Burt and the rest of the gang. Perhaps Vampire Burt’s Serenade could have been much better if had been backed by a bigger production studio.

You should check this out if you have some time on your hands to spare… you might not enjoy the movie entirely but hopefully it would be worth your while.