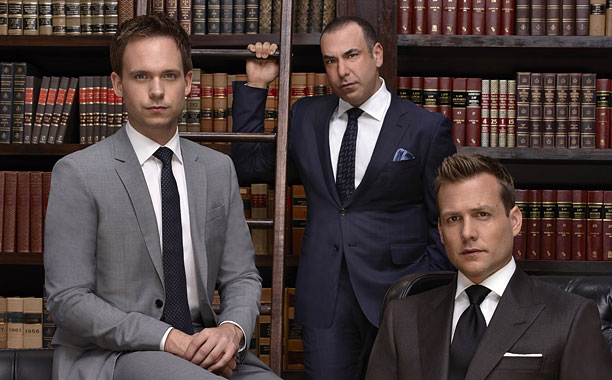 I have always found it difficult to nurture any interest in TV shows and series. I have always preferred watching the same movie more that ones (Mostly 3 times in a row if it is that good) over following a TV series. Well…. A couple of times I have done my best to follow a few but…. to me they have always lacked the extra punch to keep me dazed and hooked for more than the first few episodes. Yeah, up until I found Suits… I didn’t know what to expect and I didn’t have any high hopes either, I gave it a shot and  4 seasons with 54 episodes down and I am still hooked and can’t seem to get enough of it.

The 90mins pilot of the whole series was enough to interest me….

While running from a drug deal gone bad, Mike Ross (Patrick J. Adams) a brilliant college dropout out with a photographic memory manages to slip into a job interview with Harvey Specter (Gabriel Macht) who happens to be one of New York’s best lawyers and manages to impress him with his raw talent and knowledge of the law even though he had never been to law school. Harvey takes a huge gamble and hires him; together they form an unstoppable team.

Yeah… sounds ridiculous but that is the underlining plot of this series that goes on to reveal many more equally intriguing sub plots and stories over the cause of it’s 4 seasons (So far) with the aid of several well written characters taking into consideration different human characteristics and personalities.

I had read some reviews from critics who felt that the series was not going to last more than a season because it was either too complex of too ridiculous. Two seasons in, there where unconfirmed reports that it would be discontinued. (Imagine my shock) Allegedly the producers felt that it was not gaining enough following. It went on a long break, the writers did some magic and it came back with a huge bang. (I thank God it did)

you get to see allegiances forged, friendships tested, betrayals, blackmails, heartbreaks as well as some kick ass moments. I don’t think there is any other series out there that packs all these in a good bundle of humor that is not just entertaining but very educative and informative as well. (I am always impressed when I get to learn something from the titles I watch). The cast I must say all ‘suit’ the characters they play… from expressing emotions to even fully embodying the character. Aside a few minor individual flaws I haven’t watched any other series that packs such a perfect cast… You could almost feel the synergy and chemistry between them.

The dialogue is always clear and clever. And you can never get tired of the Witt and humor. The suits…mehn….you have got to love the suits. The characters seem to never run out of style and suave… the fashion is always stepped up.

Story lines have been on point so far….  Almost always predictable to some extent (if you are paying attention, that is) but never lacks the usual unexpected twists that keep you on edge waiting for the next episode. You never get lost or caught up with some unnecessary law jargon’s or technicalities so it’s easy to follow along as events unfold.

Season Four has been a magnificent ride for me and any one who is as hooked as I am would definitely agree me.

We have seen Mike Ross try to succeed as an investment banker, well… with a bit of a mean streak, his relationship with Rachel Zane (Meghan Markle) (Mikes love interest) being tested, a not so cold side to Harvey, an unexpected love interest for Jessica Pearson (Gina Torres), Donna’s (Sarah Rafferty) hidden passion  and a climax with Louis Litt (Rick Hoffman) turning the heat all the way up. We have also seen some new characters (Played by some equally good actors like Eric Roberts and Neal McDonough) who have also added depth to the whole story.

If you want a TV series that properly incorporates legal matters into all aspects of human nature yet is still entertaining enough to keep you wanting more then this is for you. It’s currently on summer break so you can start and catch up before it returns.

If this series goes on for a life time I would be still be hooked provided it doesn’t loose any of its qualities but only gets better and better. So far the status quo keeps rising for them.

I honestly can’t wait for Suits to come back with the rest of Season 4. I would pick this any day over some witches and dragons. (Yiee.. lol)

Movie Review: The Giver 2014 *Knowing Can Change Everything*