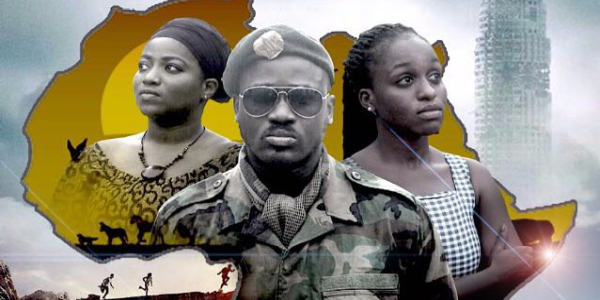 If you are familiar with the waves Frank Rajah Arase’s Somewhere in Africa created some time back in 2011, then you would be as eager as we were to see this play. It received 7 nominations at the 9th Africa Movie Academy Awards in 2013, but only managed to take away only the Best Actor in a Leading Role which was won by Majid Michel.

Just like the award winning film, the play shows how a tyrant in his bid to save the retrogressing nation of Kimbala from economic crises caused by its failed leaders, further complicates the lives of the people of the nation with his ruthless killings and abuse of power. Only a group of students are brave enough to stand up against him even if it costs their lives.

Africa as a whole has felt its fair share of civil wars mostly as a result of political struggles and the abuse of power and this play do a decent job at highlighting that in an entertaining and educative dramatic peace.  It attempts to show violence in a mild way which is acceptable for stage and a live audience. The beauty of this play is how it’s able to stir up emotions when you are being entertained. Maybe it’s because it talks about a subject we all hate to discuss… WAR.

At the center of this play is General Yusuf Mombasa, the tyrannical warlord played by Emmanuel Prempah who gave a performance almost as good as that of Majid Michel in the original film. It’s almost as if he had been an understudy for the award winning actor during the making of the actual film. Emmanuel’s presence was well felt in each of the acts he was in Just like Majid’s was felt in the film. It’s a bit strange that everyone seemed to love that character which was meant to the villain in this play just because of his amazing performance.

This play does a great job bringing to light the struggles Africa has had to endure as a result of civil wars. Director Jospeh Yoyowah Jnr’s adaptation did well to focus on only the important scenes from the original movie and fuses them with narrative speech from a character representing the soul of Africa. We loved the recitals from this character as she purposefully showed the history of Africa and our constant strive for peace using emotional connotations like her pain, suffering, joy and laughter. We noticed some of the dialogue from the film was used in this play, especially for General Mombasa’s character. But we also loved the original dialogue used in this play as well.

This play made use of a lot of characters. We kept wondering how they were all going to make use of the small stage. But they managed to make good use of the set design. Although the play seemed to have too many acts you could barely notice since the stagehands were always quick to reset the stage and props to properly accompany each act. Since the intermissions didn’t drag for more than necessary the play was fluid and there was never a dull moment for us.

For us who had seen the original film before this play felt a lot like re-watching the film excerpt that this time it was unfolding right before us on a  stage. It’s surprising how much details were showed in its estimated 1hr 35mins duration.

We doubt that anyone who has seen the original film would be able see this play without feeling a bit of nostalgia playing back to the emotions you felt when you first watched the film. This shows how equally good this stage play is. We applaud the effort at attempting to adapt this very much acclaimed film into a stage production.

Again we were impressed by this campus production. We would love to see this play again… hopefully on a much bigger stage.

If you didn’t get to see this opening, then you should do well to swing by the ETS Drama Studio either tonight or Saturday night (7pm each night) to catch this stage adaptation of “Somewhere in Africa”.